Kodiac and Dutch Art are the breeze-up kings

The list of graduates from the breeze-up sales in recent years is pretty impressive. Dream Ahead, Quiet Reflection, Brando, My Dream Boat, Trip To Paris, Margot Did and several more Group 1 winners are all recent graduates. Even more surprising is the fact that the average price for Group 1 winners since 2010 is a mere £61,215. But aside from the potential bargains, ask any buyer and they’d all probably agree that it is much more likely to end up with a sound racehorse buying at the breeze-ups rather than the foal or yearling sales. And this is borne out too by the records of many sires who tend to have a high representation at these two-year-old sales.

One of the hottest commercial sires around at the moment is Kodiac, the three-parts brother to the top-class Invincible Spirit. He’s sired more Stakes-winning breeze-up graduates than any other sire since 2010. Now in his ninth year with runners, Kodiac, the Group 3-placed son of Group 1 Prix de Diane heroine Rafha who was rated 112 by Timeform, sires Stakes winners at a rate of 5.7%, somewhat below the level normally expected of a sire standing for €50,000. His best ten runners have an average Timeform rating of 119 which is a perfectly respectable score for a sire in his ninth season, but again below many others who never really enjoyed the same commercial appeal. In fact, there are many stallions around that are far more adept at producing Stakes winners but cannot even attract a full book of mares.

So what is all the fuss about? The reason is simple. Kodiac produces the type of racehorse the modern-day owner craves. Early to mature and fast, the sort to provide an immediate pay back both in terms of personal pleasure and financial returns. Last season he set a world record with 54 two-year-old winners and no fewer than 50 of his yearlings made €100,000 or more. Trainers and agents can’t get enough of his stock, so little wonder then that the Kodiacs should also be so well sought-after at the breeze-ups.

But it goes further than that. Kodiac is a completely different proposition at these sales. With his stock being much closer to the finished article, it transforms him into an exceptional sire. Since 2010, 76 have been sold and feature a remarkable 13 Stakes winners. That’s a hugely impressive strike rate of 17.1% which dwarfs his overall career ratio of 5.7%. So, Kodiac at the breeze-ups is more akin to a Galileo or a Dubawi when it comes to his Stakes-winner ratio, if not the overall class of his horses. His 13 Stakes winners since 2010 have cost on average a shade over £82,000 and include the likes of Group 2 winners Ardad, Prince Of Lir and Adaay, plus Group 3 scorer Jamesie. 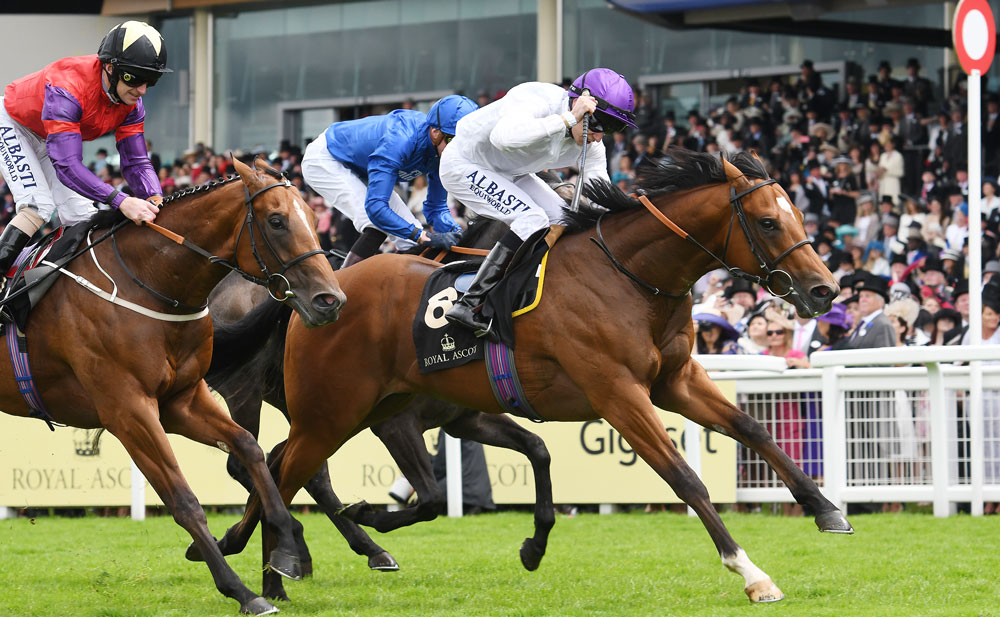 Kodiac’s son Prince of Lir, who was sold for £170,000 at the Goffs UK Doncaster Breeze-Up Sale in 2016, wins the Group 2 Norfolk Stakes at Royal Ascot.

Another excellent breeze-up sire in recent years is our table topper based on percentage of Stakes winners Dutch Art, who is based at Cheveley Park Stud. Like Kodiac, Dutch Art’s career Stakes-winner-to-runner ratio is 5.7%, but at these sales six, or 18.2%, have become Black-type winners and include one of his most talented runners in Group 2 scorer Caspar Netscher, who was well bought at 65,000 guineas.

Invincible Spirit, Kodiac’s three-parts brother, has seen six of his Stakes winners come from the breeze-up sales. His Group 1-winning daughter Roshdu Queen, winner of the Lowther and Cheveley Park Stakes, was purchased at the Craven Breeze Up by David Redvers for 65,000gns. But the highest rated Invincible Spirit was Spirit Quartz at 123 after his excellent second in the Group 1 Nunthorpe. Another former Cheveley Park stallion, Kyllachy – who is represented at this year’s sales – has also enjoyed far greater success at the breeze-ups with 10.3% of his sold horses going on to be Stakes winners. It’s the same story for Pastoral Pursuits, Arcano, Compton Place and Kheleyf – all outscoring their career ratios.

It’s clear to see that buying a two-year-old at the breeze-up sales greatly increases your chances of finding a Stakes winner compared with buying at the foal and yearling sales. The 26 sires who have sired at least one Stakes winner since 2010 collectively have a higher average ratio of Stakes winners (8.7%) from their breeze-up stock than they do overall (5.4%), with 24 of the 29 sires topping their career ratios, eight of them by more the five percentage points. It clearly pays to keep an open mind about sires at the breeze-ups.