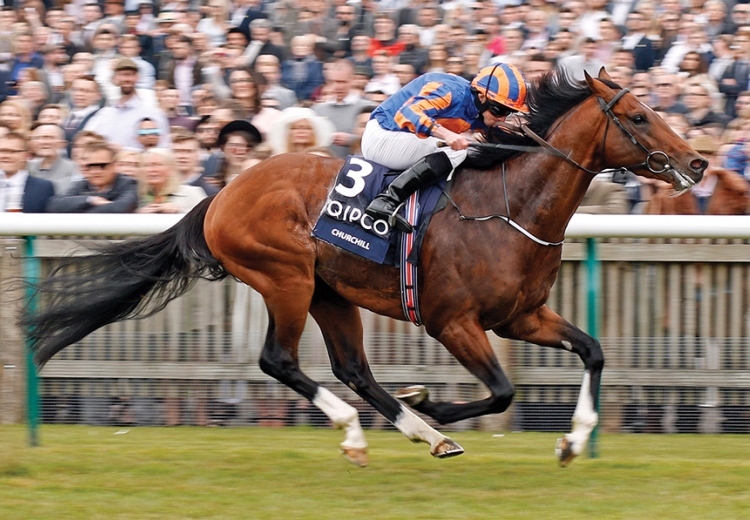 The dual Classic-winning miler, Churchill stands his first season at Coolmore Stud at €35,000.

There is something for everyone among the milers retiring to stud in Britain and Ireland in 2018. Priced between €8,000 and €35,000, this group contains some of the best racehorses of recent years: Churchill and Barney Roy were the star three-year-old milers of 2017, while Ribchester and Galileo Gold represent the older generation.

Churchill, a tall horse with a reputation to match from the outset of his career, ran third on his debut and then went on an eight-race winning streak that started in the Chesham at Royal Ascot and ended on Irish 2,000 Guineas day at the Curragh. In between, he won all the important races, including the Group 1 National, the Group 1 Dewhurst and the Group 1 2,000 Guineas. Any colt that completes the Dewhurst-Guineas double is bound to be at the apex of commerciality and Churchill is no exception. Having Galileo as his sire adds to his appeal now that the likes of Frankel, Teofilo and New Approach have all been successful at stud.

The fact that he was less successful when tried beyond a mile could just be his pedigree coming to the fore. His dam Meow, also dam of Churchill’s excellent Group 1-winning sister Clemmie, was campaigned only at two and exclusively over five furlongs, winning a Listed race at the Curragh after finishing second in the Group 2 Queen Mary at Royal Ascot. She is a daughter of the Group 1-winning 120-rated Airwave who won at up to a mile but was best over six furlongs. Rated 126 by Timeform, Churchill will get plenty of support even if many fine Galileo mares are be ruled out.

The same may be true of his contemporary Barney Roy, who features Galileo as his broodmare sire. Though standing at £10,000 in Britain, Barney Roy is likely to attract a different type of mare. In terms of pure class, Barney Roy is a bargain. Rated, like Churchill, 126 by Timeform, the long-striding bay won over a mile on his only two-year-old start. His spring and summer form as was excellent, notably winning the Group 1 St James’s Palace Stakes in the fastest time recorded for Ascot’s round mile, that after running an unlucky second to Churchill in the Guineas. Barney Roy also put up some fine displays over ten furlongs, particularly in the Eclipse Stakes where he failed by a whisker to overcome Ulysses. By Exceed And Excel’s best son, the 133-rated triple Group 1-winning miler Excelebration, Barney Roy is the first foal of his unplaced dam, but his second dam is the 115-rated dual Group 3 scorer Cheyenne Star.

Another top miler featuring Galileo as his dam’s sire is Galileo Gold. An absolute bargain buy as a yearling at only €33,000, Galileo Gold had a busy and fruitful two-year-old campaign which climaxed with a win in the Group 2 Vintage Stakes, followed by a third to the Godolphin pair Ultra and Cymric in the Group 1 Prix Jean-Luc Lagardere. He really excelled the following spring, going straight to Newmarket to take the Group 1 2,000 Guineas from Massaat and Ribchester. An unlucky second in the Irish equivalent, Galileo Gold was back on top at Royal Ascot, taking the Group 1 St James’s Palace Stakes from The Gurkha and his Ireland conqueror Awtaad, before losing narrowly to The Gurkha in the Group 1 Sussex. Galileo Gold’s sire Paco Boy was a top-class miler rated 129 by Timeform when he won 11 of his 24 races, including three Group 1s – the Prix de la Foret, the Queen Anne and the Lockinge. He’s sired eight black-type winners so far (3.4%), also including the progressive 125-rated Beat The Bank. Like most of the sires under review Galileo Gold’s dam was of little account on the racecourse, buts she’s a Galileo half-sister to the Group 1-winning 123-rated sprinter Goldream. It’s the family of the brilliant Montjeu who sired 11% black-type winners in an excellent but shortened stud career, plus Classic winner Again and The National Stud’s new recruit for 2018 – the Group 1 Prix de la Foret winner Aclaim. 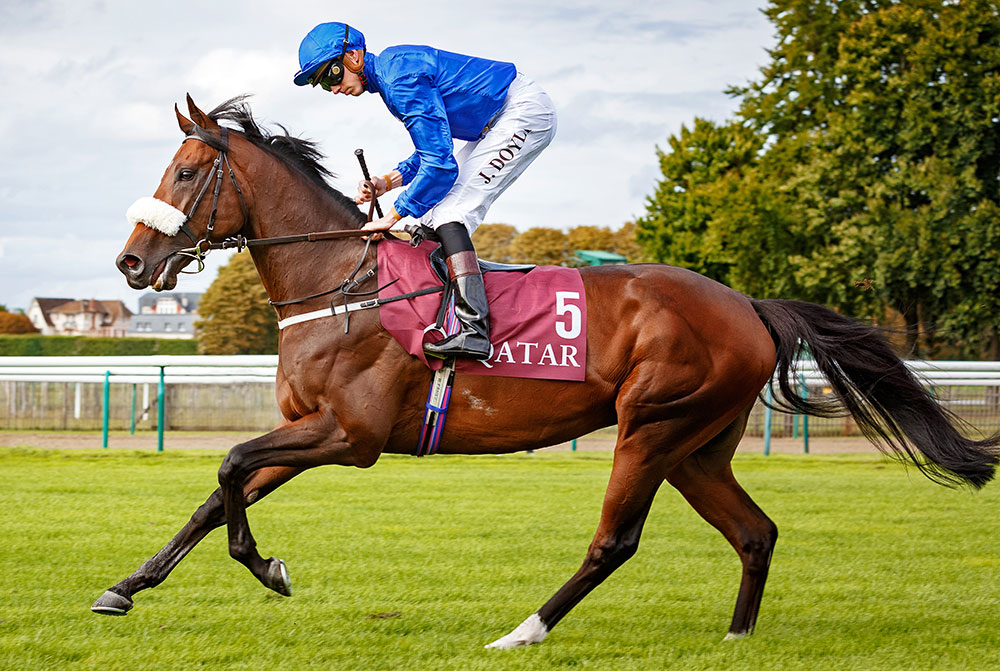 Four-time Group 1 winner and European Champion Miler Ribchester. He retires to Kildangan Stud at a fee of €30,000.

So far we have reviewed three milers rated 126 by Timeform. Next we have perhaps the best of them all in Ribchester, who was assessed at 129. Ribchester, a €105,000 yearling, was a very forward two-year-old, running second in the Group 2 Gimcrack on only his second start and then breaking his maiden in the Group 2 Mill Reef Stakes. Third in the Guineas, Ribchester scored a notable triumph in the Group 2 Jersey at Royal Ascot before stepping back to a mile for a third place in the Group 1 Sussex. He nailed on his next start, taking the Group 1 Prix Jacques le Marois before succumbing to the brilliant Minding in the Group 1 Queen Elizabeth II Stakes. Back at four, Ribchester added three more Group 1 victories to his tally, taking the Lockinge and Queen Anne in succession, and then the Prix du Moulin later in the year. Remarkably consistent throughout his career, the son of Iffraaj was only out of the first two in five of his 16 races. In-bred 3x3 to another brilliant miler in Nureyev, Ribchester is from the top-class family of Fall Aspen. Almost 50 Black-type winners descend from this great mare, including the likes of Dubai Millennium, Intello, Elnadim and Hamas. And only the great Dubai Millennium (rated 140) has a higher Timeform rating than Ribchester. His sire Iffraaj is also responsible for Wootton Bassett, Rizeena and Chriselliam as well as a host of good horses from his New Zealand base, including Group 1 winners Turn Me Loose, Gingernuts and Jon Snow. 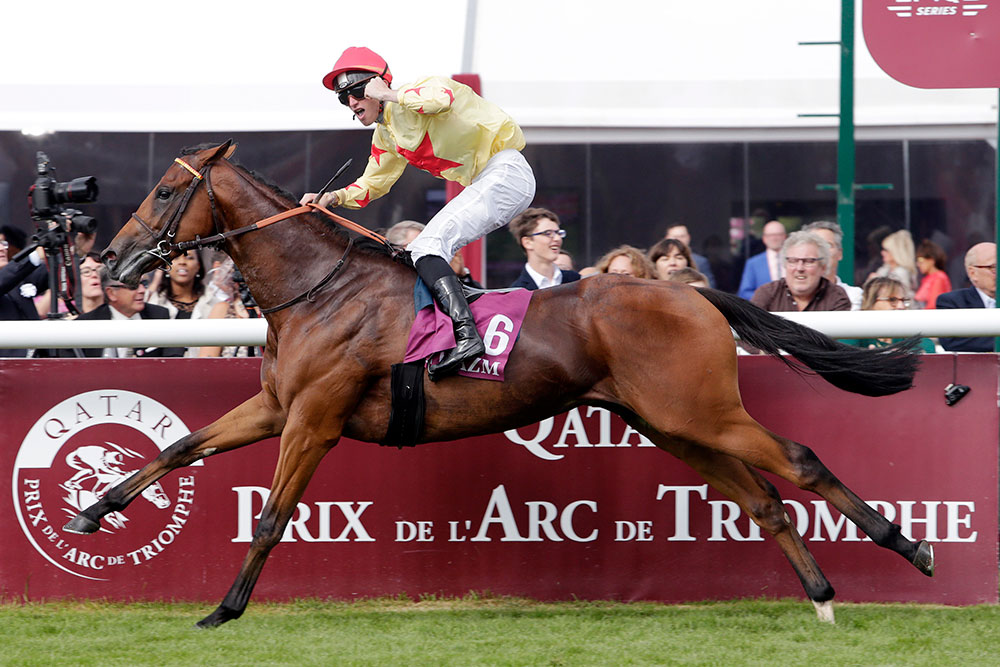 Prix Jean-Luc Lagardere winner, National Defense. The son of Invincible Spirit joins his sire at the Irish National Stud at a competitive fee of €12,000.

Standing for €12,000 at the Irish National Stud in 2018 is the Group 1 Prix Jean-Luc Lagardere winner National Defense. This competitively priced son of Invincible Spirit is a potential heir to his sire who has been the premier speed sire in Britain and Ireland in recent times and he has quite a few offspring lined up to ready to emulate his achievements. Sire of 97 Black-type winners in the Northern Hemisphere (8.3%), Invincible Spirit’s stallion sons have been making plenty of headlines recently through Kingman, whose first crop sold well last year, and I Am Invincible, who stole the show at the recent Magic Millions yearling sale in Australia. Rated 118 by Timeform, National Defense started only five times for two victories both at a mile. That said, his Jean-Luc Lagardere victory was very impressive and he’s clearly a nice-looking horse as his €280,000 yearling price tag suggests. His dam, the unraced Angel Falls by Kingmambo, is from a prodigious family of Anna Paola, ancestress of the three-parts Group 1-winning colts Helmet and Epaulette, both of whom have made bright starts to their stud careers. 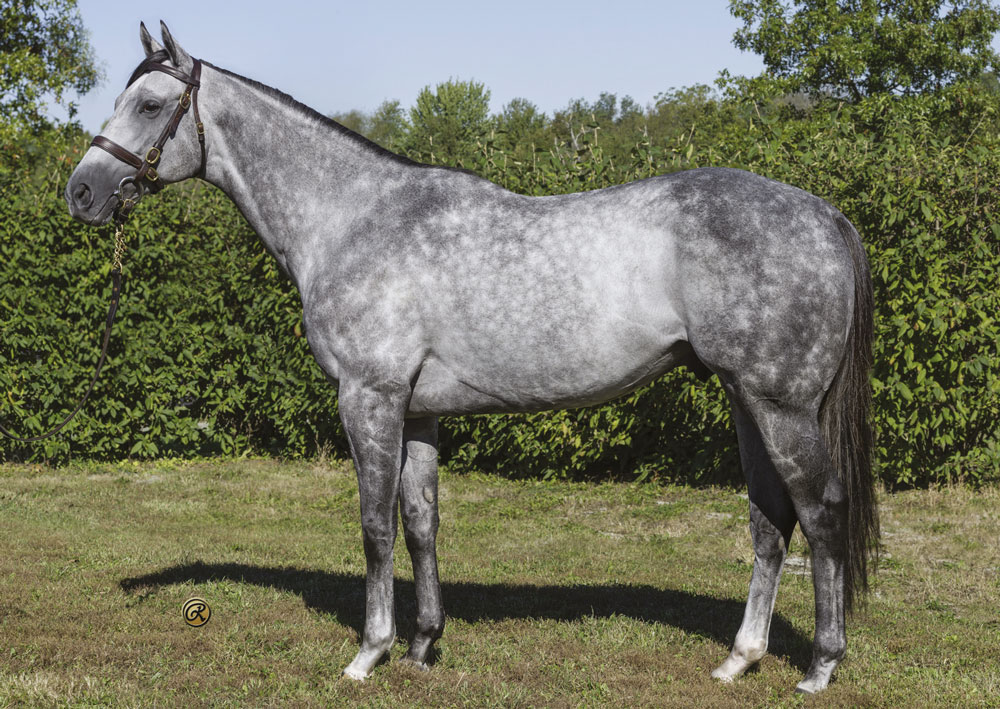 Our remaining two candidates, Tivaci and El Kabeir, were both raced abroad. Tivaci, a Group 1-winning son of High Chaparral, will shuttle to The National Stud from Waikato Stud in New Zealand and stand at a fee of £8,000. Rated 120 by Timeform, Tivaci finished his 21-race career with a fine win the Group 1 All Aged Stakes at Randwick over 1,400m. A son of a winning Fastnet Rock mare, Tivaci has a decent Australian pedigree, his grandam being a Group 2 winner and dam of the Group 1 Toorak Handicap winner Allez Wonder by Redoute’s Choice.

El Kabeir retires to Yeomanstown at €8,000 billed as Scat Daddy’s fastest American juvenile son. His 94 Beyer speed figure – earned when he won the Group 2 Kentucky Jockey Club Stakes at Churchill Downs – is certainly the best by a two-year-old son of Scat Daddy. It equates to a Timeform rating of about 115 which puts him right up there with some of our smarter juveniles. Out of a mare by Unbridled’s Song and from a solid Stakes family, El Kabeir won at up to 8.5 furlongs and was placed at Group 1 level over nine furlongs, so he may have more strings to his bow than you might think.