The day that Quality shone through

Belmont Stakes day was remarkable not least for the fact that we witnessed the 13th US Triple Crown winner Justify. But the undercard – if we can all it that – also featured two Grade 1 winners by Quality Road in the filly Able Tasman, winner of the Ogden Phipps, and the gelding Spring Quality, who took the Manhattan on turf. He also had two further Stakes winners on the same day at other venues in North America, including the Grade 2 Honeymoon Stakes heroine, Paved at Santa Anita.

Although he sired Royal Ascot scorer Hootenanny from his first crop, European agents and breeders have largely ignored Quality Road’s potential and his story so far belongs in North America. He was a truly outstanding racehorse, arguably as good as anything by his sire Elusive Quality. A measure of the high regard in which he was held can be gleaned from his Timeform rating of 131. Smarty Jones, rated 134, and Raven’s Pass, rated 133, were considered by Timeform better sons of Elusive Quality, but the sheer brilliance of Quality Road’s performances deserve comment. 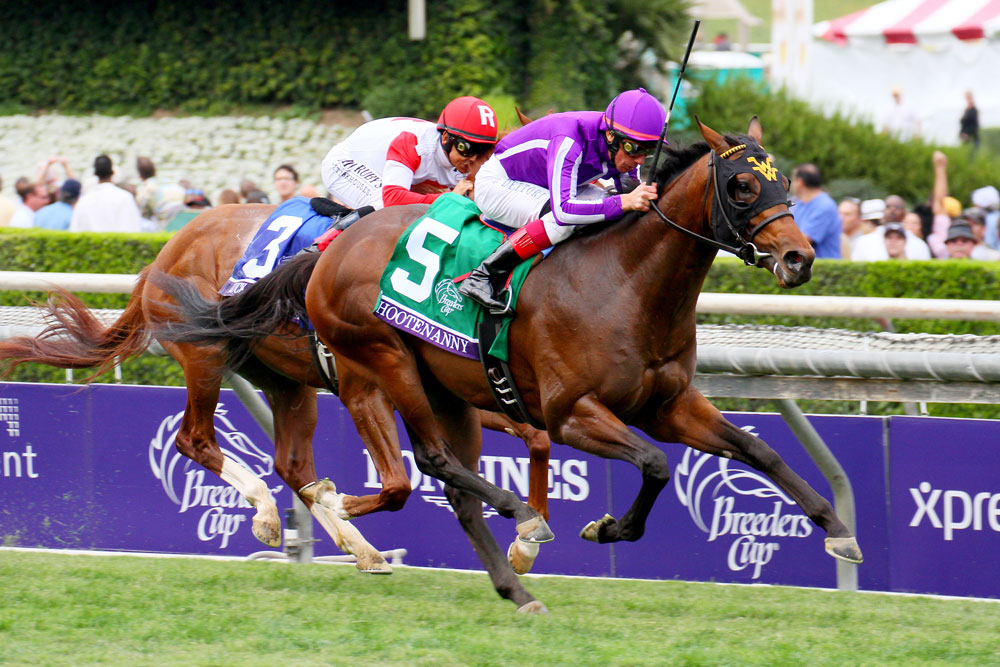 Quality Road raced 13 times over three seasons. In no fewer than 11 of those outings he recorded triple-digit speed figures. On his sole outing at two, over 6.5 furlongs at Aqueduct, he earned a massive Beyer of 101. A Beyer of 100 or more by a two-year-old is virtually unheard of and equates to a Timeform rating of over 130. His brilliance was again clearly evident early in his three-year-old season when he won the Grade 2 Fountain Of Youth (Beyer 113) and Grade 1 Florida Derby (Beyer 111), in which he established a new track record.

Favourite for the Kentucky Derby, Quality Road was to miss the Triple Crown due to two separate quarter cracks, the first sustained when winning the Florida Derby. Back to the races in August and now switched from Jimmy Jerkens to Todd Pletcher, he showed he’d lost none of his sparkle by taking the Grade 2 Amsterdam at Saratoga (Beyer 110 and a new track record) over 6.5 furlongs. Clearly brilliant at up to nine furlongs, Quality Road wasn’t quite as effective going a mile-and-a-quarter – his next two starts yielded a third in the Grade 1 Travers and second in the Grade 1 Jockey Club Gold Cup. He ended that season by refusing to load into the starting gate for the Breeders’ Cup Classic.

Back at four, he resumed winning ways in a Grade 3 at Gulfstream Park – a prelude to his outstanding victory in the Grade 1 Donn Handicap, when recording a huge Beyer of 121 on the way to lowering his own track record. That year, he also added victories in the Grade 1 Met Mile and Grade 1 Woodward, but was pulled up in the Breeders’ Cup Classic due to a foot abscess.

Quality Road’s hallmark was his uncompromising speed at up to nine furlongs. His 121 Beyer winning the Donn has not been bettered since at distances above a mile. Retired to Lane’s End at a fee of $35,000, he has established himself as the best sire son of Elusive Quality. His ratio of Stakes winners to runners stands at 8.9% which fairly reflects what his mares suggested he should achieve. Only Raven’s Pass (8.4% Stakes winners to runners), Great Notion (8.1%) and Smarty Jones (6.0%) among Elusive Quality sons with 100 or more runners get close to him, while Elusive City has recorded 8.3% from his southern hemisphere runners.

Moreover, when we look at stallions descending from Gone West, we find that Quality Road has only Speightstown (11.7%), Speightstown’s son Munnings (10.7%) and Zafonic (10.1%) ahead of him – and he’s easily outpointing his own sire who has sired 7.6% Stakes winners to runners from his northern hemisphere foals.

Quality Road is by a world-record turf miler who’s left plenty of accomplished turf runners and has a broodmare sire who excelled on grass, plus a third dam, Highest Trump, who won the Group 2 Queen Mary at Royal Ascot. It’s not surprising then that Quality Road should show some propensity for getting turf runners. His first crop featured three Grade 1 winners on grass, Hootenanny, who took the Windsor Castle and Breeders’ Cup Juvenile Turf and ran second in the Prix Morny; Gamely heroine Illuminant, plus Spring Quality. So, don’t be surprised to see many more major turf runners from this talented son of Elusive Quality.

Given the huge success of Elusive Quality in Europe – 27 Stakes winners, including Group 1 winners Raven’s Pass, Elusive Kate, Certify and Elusive City – it might be just about time for Europeans to sit up and take a keener interest in his most accomplished sire son.