Burns happy if it's a Jungle out there

Maurice Burns ponders a group of Bungle Inthejungle foals and their dams, and says: “It’s nice that studs like ours all have a good stallion at the moment. Rathbarry has Acclamation, Tally-Ho has Kodiac, Yeomanstown has Dark Angel and we’ve got Bungle. It’s a bit upsetting when you find you don’t have one to compete.”

It is business as usual at Burns’ Rathasker Stud, just a short drive from Naas in County Kildare. There was a kick below the belt in March, when a maiden mare’s deftly-placed hoof caught nine-year-old Bungle Inthejungle in a delicate place, but the resulting swelling took little more than a week to be shrugged off. 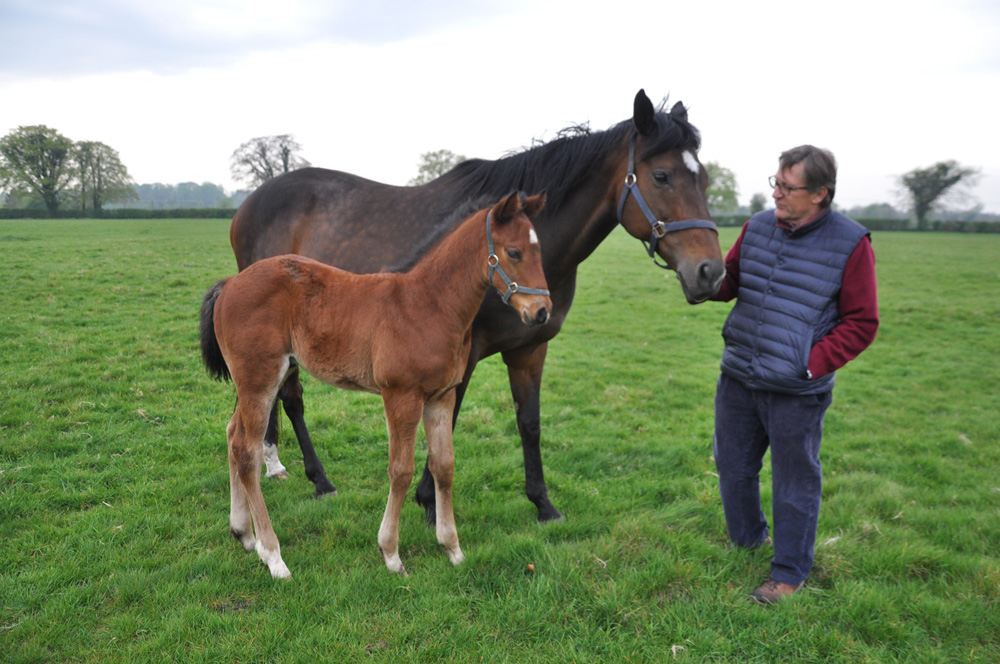 Already the dam of two multiple winners, Bank On Black is pictured here with her 2019 filly foal by Bungle Inthejungle.

By then Gregorian had relocated from The National Stud to Rathasker as cover, but it was an apt move given that the ten-year-old grey was returning to his birthplace and a slot alongside his veteran sire Clodovil. In 2018, Gregorian made a good start with his initial crop, and on Saturday at Thirsk the Karl Burke-trained filly Insania became his first turf winner from his second crop. 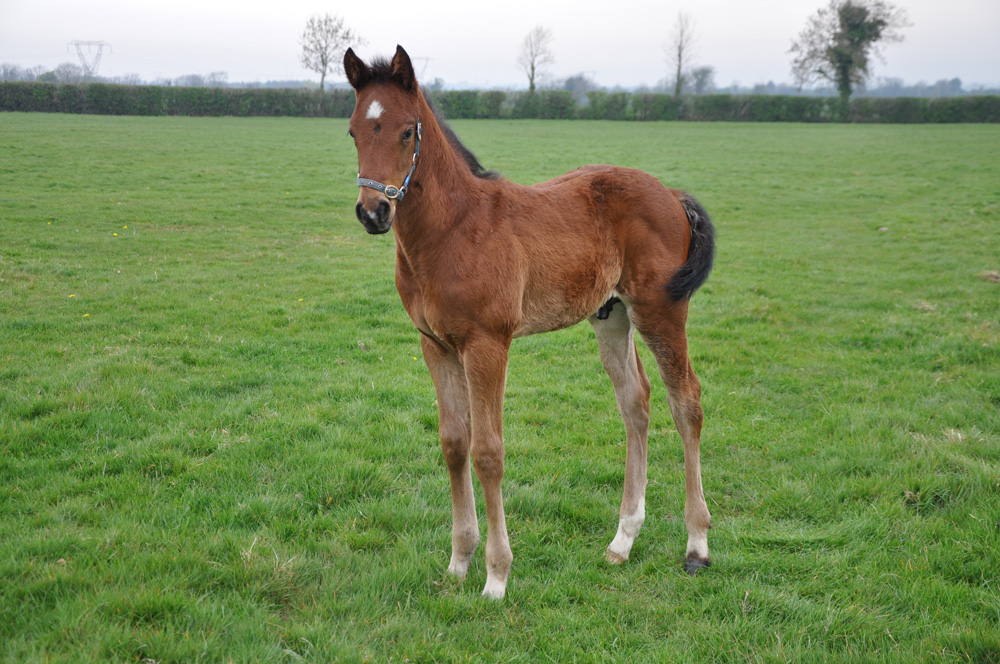 Another Bungle Inthejungle foal, this time a colt out of Convidada, dam of the decent sprinter Oloroso.

Add in Rathasker’s eight-year-old sire Anjaal, whose first two-year-olds are reaching the track, and Burns has an exciting young roster to offer. Windham Belle became Anjaal’s first winner in Ireland when scoring at Dundalk on Friday, a victory that followed victories for members of his first crop in France and Italy.

Luck plays a big part in the horse world, as Burns knows too well, and he says: “We keep going back to luck . . . ” before reeling off another anecdote which reveals how a horse bought here or one sold there has played a significant role in his family’s success. A cross-border move was just the start.

Burns was born in Northern Ireland where his father, Paddy, farmed three small patches of land, traded livestock and pretty much anything else which could turn a profit. While travelling a mare to be covered in the south, Paddy spotted a ‘for sale’ sign on a property that proved to be Lodge Park Stud in County Kilkenny. Burns recalls: “Dad came home and said to Mum, ‘We’re moving’. My mum was a saint, so they sold the three bits of land and moved south.

“Now my nephews Damian and Jamie run Lodge Park, his brother Paddy has Loughtown and Ronan runs Herbertstown. They are all separate businesses, but there are links in the chain.”

Burns may not have the stallion power of the biggest studs, but he knows where oak trees emanate, saying: “You have to respect the stallions who make it off a low fee – stallions like Invincible Spirit, Showcasing, Kodiac, Dark Angel and Danehill Dancer. They did it the hard way by starting off with ordinary mares.”

A pick-up truck pulls into the yard, and a farmer steps out to view the stallions he might consider for his mare. He might not have a Group 1 winner or producer to be covered, but the nuances of breeding mean talent can spring from any cover.

Burns clearly enjoys dealing with such mare owners, and says: “A lot of breeders in Ireland would have just a couple of mares, some cattle and sheep, and they might grow a bit of grain. The horses supplement the income, and if they breed a mare for €5,000, and sell the foal for €20 - €30,000 that could be as much as they make from the cattle all year.

“A lot of foals have been produced, and it’s not always easy to get them into the sale of your choice, but there are nice horses at every sale; you just have to do a bit more legwork on occasions.

“One of the best mares I owned, Sabaniya, came out of a jumps sale in June – she was from an Aga Khan family, but had refused to go into stalls so they ran her in bumpers and she had won at Downpatrick. I was flicking through the catalogue and noticed her page, so went to the sale and bought her outside the ring for seven grand (IR£7,000). Her first foal, a filly by Mujadil, I sold out of the field for 50 grand.

“She won and was placed in the Prestige Stakes, and so the owners came back to me to buy the next foal, also by Mujadil. They offered me another 50 grand, but I said ‘I don’t think so’, and at the sales she made 260 grand. We went on to sell plenty more foals out of Sabaniya – it’s funny how things happen. It all comes down to luck.”

Anjaal, a son of Bahamian Bounty out of Ballymore Celebre (Peintre Celebre), carried Sheikh Hamdan’s colours to victory in two races, including the Group 2 July Stakes. His first crop are two-year-olds.

Burns says: “He was bought by a syndicate to stand in Newmarket – I had been watching him, liked his pedigree and his form, and knew he was a good-looking horse, and when I heard he might be available I sent someone to look at him. Then one of the syndicate members rang and asked if I would stand him, and I said, ‘No, but I’ll buy him’, which I did. 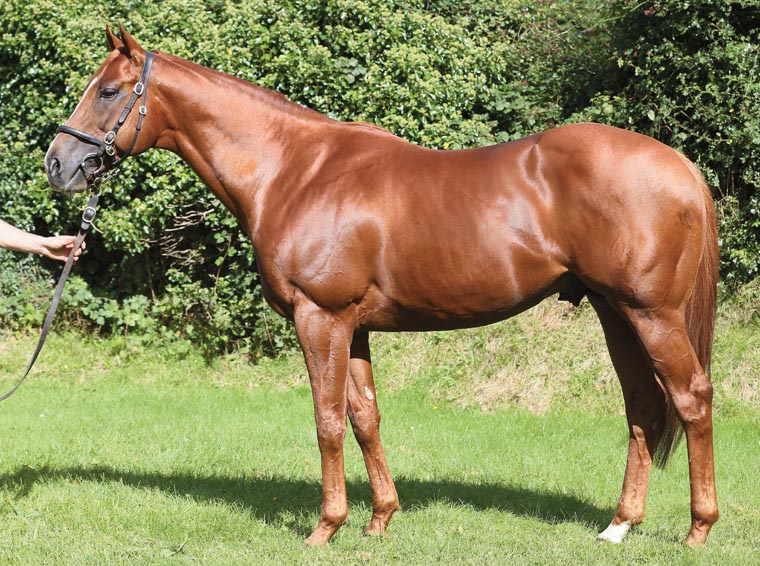 “Physically he was very good, I liked the female line and I’ve long been a fan of his sire, Bahamian Bounty. I got lucky when I received that phone call, but I had to buy him myself, and then set about selling shares in him, otherwise word gets out and someone else tries to buy him.

“You buy and then sell shares – it’s a bit like buying a house before you’ve sold the one you’re living in, but I sold 40 breeding rights to him. I contacted ten core breeders, and once they came in, others followed. He went on to cover more than 190 mares in his first season.

“It’s not crucial that a sire like this is a Stakes winner at two, but it helps a lot. We’re competing against very large and wealthy studs, and so having precocity on our side can be important. The Classic winners and milers tend to be too expensive for many breeders, so they come to the speed horses at a commercial rate.

“We have a couple of two-year-olds by Anjaal in training with Mick Channon. We have horses with six trainers in Britain and two in Ireland, but they are all good mates of mine, and I’ve been lucky with horses we’ve put into training.”

Bungle Inthejungle, a son of Exceed And Excel out of the mare Licence To Thrill (Wolfhound), had 27 individual winners with his first crop of two-year-olds in 2018, headed by Rumble Inthejungle, who, like his sire won the Group 3 Molecomb Stakes. He also took third to Ten Sovereigns in the Gr.1 Middle Park Stakes.

Burns says of Bungle Inthejungle: “He has been unbelievably good for us. He was bred by Chris Wright [of Stratford Place Stud], put into training with Mick Channon, [after failing to sell as a yearling] and turned out to be a very good two-year-old. I kept watching him, and he reminded me of Mujadil.

“Eventually I managed to buy him, and rather than syndicate him I own him 100 per cent. He covered more than 100 mares in his first season and as soon as his first crop hit the track it was apparent they were very good. He’s now doing it again this season.” 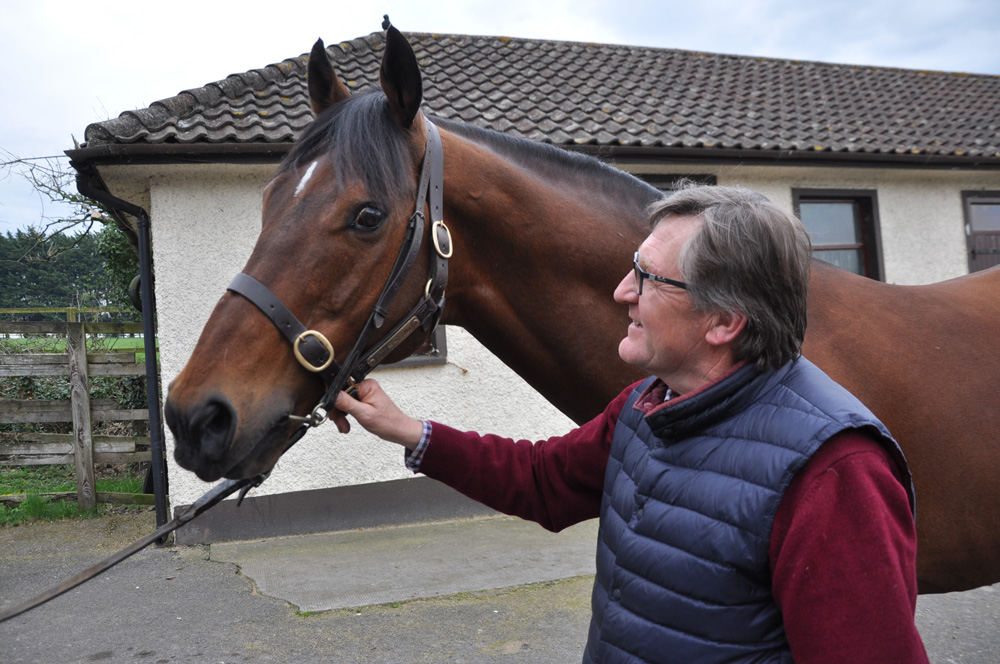 A leading first crop sire in 2018 with 27 individual winners, Bungle Inthejungle is the apple of Maurice Burns’ eye.

Gregorian, who was bred by Burns, has returned to Rathasker Stud and now stands alongside his sire, Clodovil. A son of the Cadeaux Genereux mare Three Days In May, he was a winner at two, Group 1-placed at three, and then a Group-race winner at four and five.

Burns says of Gregorian: “We bought him from Darley, sent him to The National Stud, and syndicated half of him. He stood there for four seasons, then Bungle was kicked by a maiden mare in a place where a stallion wouldn’t want to be kicked. It blew up and became one of those situations where it wasn’t clear how long he would be out of action.

“Gregorian had done well with his first crop of two-year-olds, I needed a horse in a hurry, and so we got him back here. It turned out that the swelling quickly went down and Bungle was fine after eight days.

“Getting Gregorian back here also suited his Irish shareholders. I know of a number of Irish breeders who didn’t send mares to be covered by UK stallions because of Brexit and the fear that they could be stuck there [Britain was expected to leave the EU on March 29]. Uncertainty was the problem, and this year we only sent barren mares to the UK, mares that could be covered in the first two months and then shipped back to Ireland. When it comes to animal husbandry, no one likes leaving a horse on a lorry longer than is necessary, especially when a foal is involved.”

Clodovil, a son of Danehill and the Linamix mare Clodora, was a winner at two who went on to land the Group 1 Poule d’Essai des Poulains. Burns says of the 19-year-old: “He’s been a very successful stallion for us, although he is now in the twilight of his career. He’s had a few fertility issues, so we just tip away and keep covering our own mares with him. He can still get the job done and we love putting a maiden mare to him because there is every chance the foal will be a winner. He’s had 60% two-year-old winners to runners and he gets Stakes horses.” 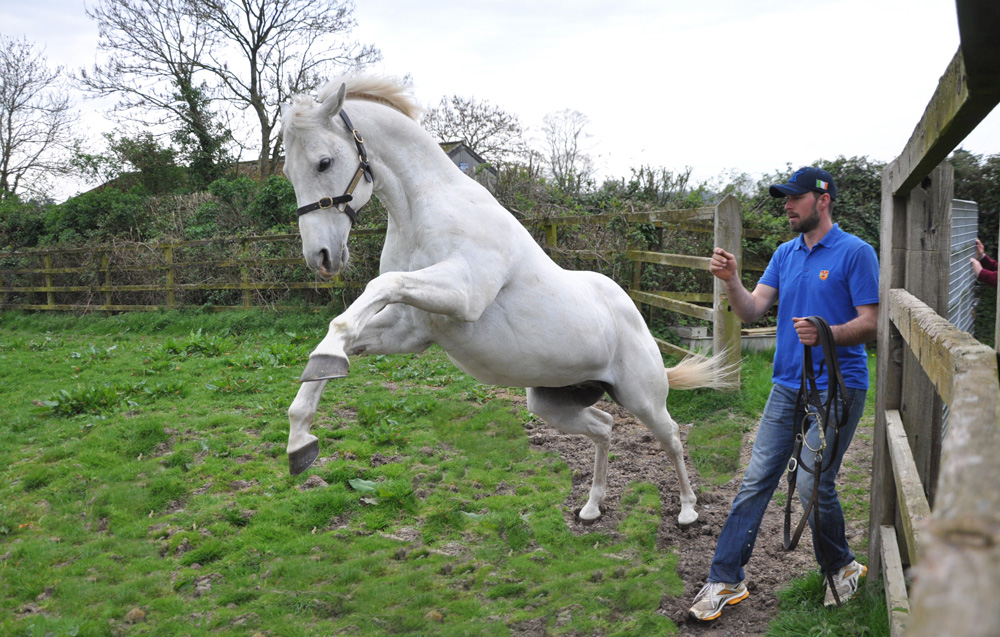 Although he’s in the twilight of his career, Clodovil shows he still has plenty of zest for life.

Coulsty, a son of Kodiac out of Hazium (In The Wings) stands under the Rathasker Stud banner, but at Norman Court Stud in Wiltshire. A winner each year from the age of two to five, he won at Group 3 level and was Group 2 placed.

Burns says: “He covered a first book of mares here, but we couldn’t really show him because he was very slightly lame having picked up an injury while in training. We covered 60 to 65 mares, just enough to get the job done, but we weren’t happy with the numbers. Having said that, he has some lovely first yearlings.

“Norman Court Stud has done very well with Sixties Icon, who is an excellent stallion, and, in my opinion, under-rated, so I suggested to Mick Channon, [a non-executive director at that stud] that Coulsty could work very well alongside Sixties Icon.”