Marking time with Awtaad and Markaz

Carl Evans goes behind the scenes at Derrinstown Stud

“It is just coincidental timing that they should retire together,” says Enda Stanley, reflecting on Derrinstown Stud’s two young stallions Awtaad and Markaz. With their oldest crops being yearlings, this is a time of anticipation at Sheikh Hamdan’s County Kildare stud, where Stanley is the marketing and nominations manager. Racecourse action relating to the stud’s current roster rests with Tamayuz and Haatef.

Expanding on the decision to stand the new boys, Stanley says: “You have a Group 1-winning homebred, plus a good, fast son of Dark Angel that the market wants. Why not stand them? And Sheikh Hamdan wants to send mares to both horses.”

Despite this short-term hiatus in on-course activity you won’t find Derrinstown’s staff hanging around the barns, hiding behind the manicured beech hedgerows, or lurking in offices like characters pondering Beckett’s Godot. There are 2,000 acres to tend, visiting and resident mares to cover, the Sheikh’s mares to foal, and the progeny of dependable Haatef and Classic-producing Tamayuz to follow through the unfolding turf season. 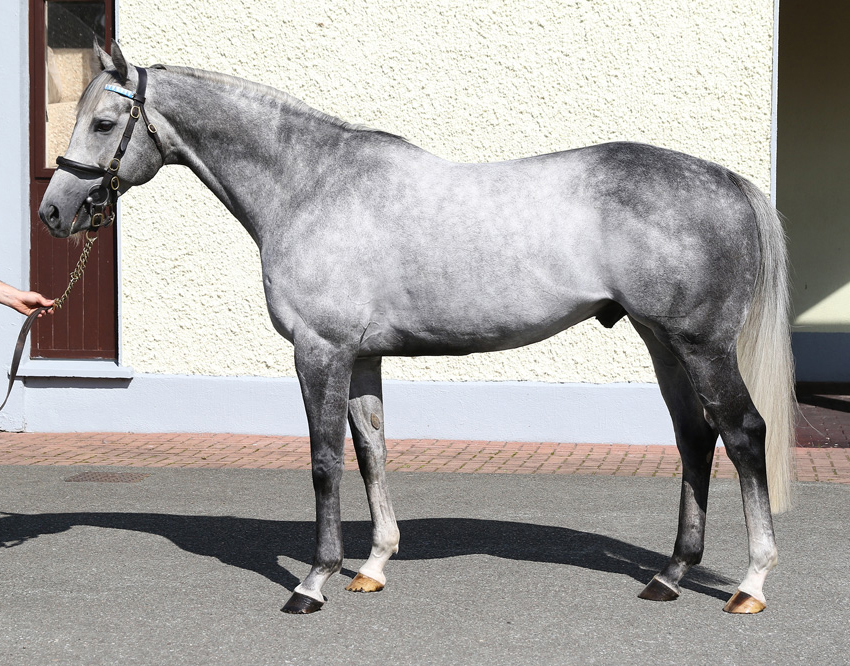 Focussing on the young sires, Stanley says: “They are quite different. Awtaad is the Classic-winning miler, while Markaz is a fast, durable sprinter. We have selected different mares for those two horses, and they have been popular with other mare owners.”

In Derrinstown’s stallion yard is a grass island which could have been designed for breeders to stand upon and gawp as Awtaad circles. Gliding on loose limbs he saunters around its circumference, his coat as sleek as that of a just-surfaced otter. Good looks create expectation, and Stanley says: “People cannot help but comment on him as a lovely, free-moving horse. He has an excellent mind, too. We had more than 400 applications for him in his first season and he covered 120 mares, many owned by loyal clients. They included a broad spectrum of mares, and 60 per cent were black-type winners or producers. More than 90 per cent were winners. 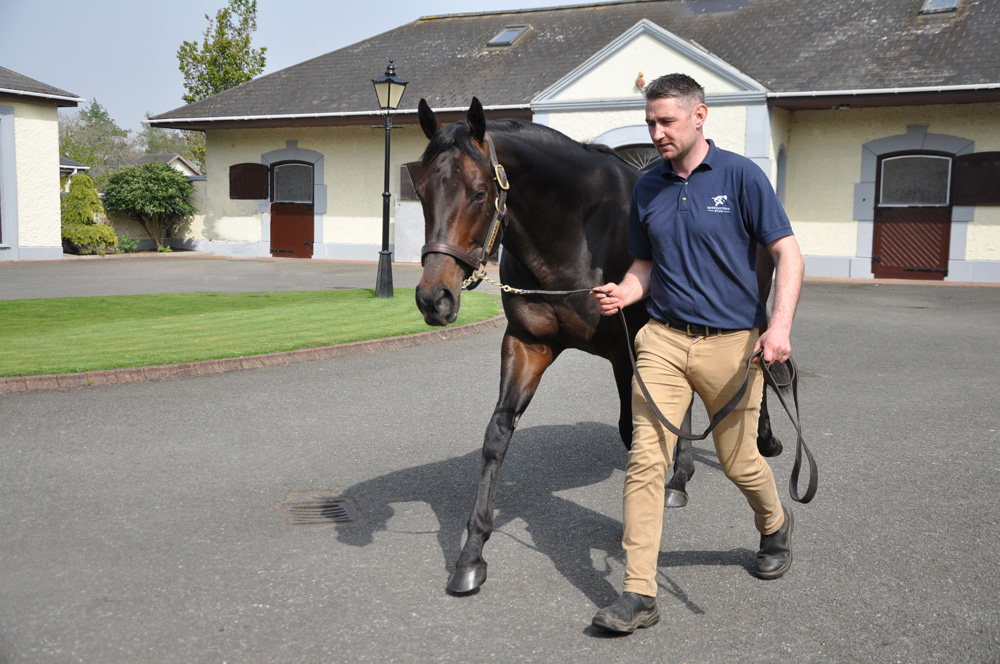 “The boss supported him, as he does all the stallions – he will usually send a stallion between ten and 15 mares.

“Markaz is a different stamp and profile of a horse. He’s popular with the more commercially-minded breeder, someone who may only have a mare or two, and that’s reflected in his fee.”

Irish 2,000 Guineas winner Awtaad, a son of Cape Cross, stands for €15,000, while Dark Angel’s son Markaz, a full-brother to that terrific sprinter Mecca’s Angel, has maintained a fee of €6,000. He raced 19 times, scored twice at Group 3 level, was narrowly denied a Group 2 victory, and won races at two, three and four years of age.

The roster is completed by Tamayuz, a Classic-producing sire son of Nayef standing for €12,500, and Danzig’s son Haatef, whose fee is €2,000.

Markaz brings fresh blood to Derrinstown’s herd, having been bought for £200,000 at Goffs UK’s Premier Yearling Sale, where he was consigned by his breeders at Yeomanstown Stud. His dam, Folga, also won races over three seasons, passing on that toughness to her pre-eminent son and daughter. Folga was one of ten winners produced by the Group 3-winning mare Desert Dawn.

Awtaad’s family entered the Shadwell fold with the acquistion of his fourth dam, Ghashtah, a daughter of Nijinsky and My Charmer, making her a half-sister to US Triple Crown winner Seattle Slew, and to his three-parts brother and Guineas winner Lomond. Ghashtah’s full-brother, Seattle Dancer, turned heads as a yearling in 1985 when selling for an eye-popping $13.1m.

Awtaad was the first foal of Ghashtah’s great-granddaughter Asheerah, who was placed at two, then won a maiden at three before finishing second in a 10-furlong Listed race at Navan for trainer Kevin Prendergast. She showed little in eight subsequent runs, but her foals have not been disappointing. Fillies by Lawman (Aneen) and Tamayuz (Alghabrah) followed Awtaad, and both won before finishing placed in black type races, while her current three-year-old, Alhaazm, is a son of Cape Cross and in training with Sir Michael Stoute. Alhaazm has run three times without winning, but given his trainer’s patience it will be no surprise if he takes a notable prize at some point. 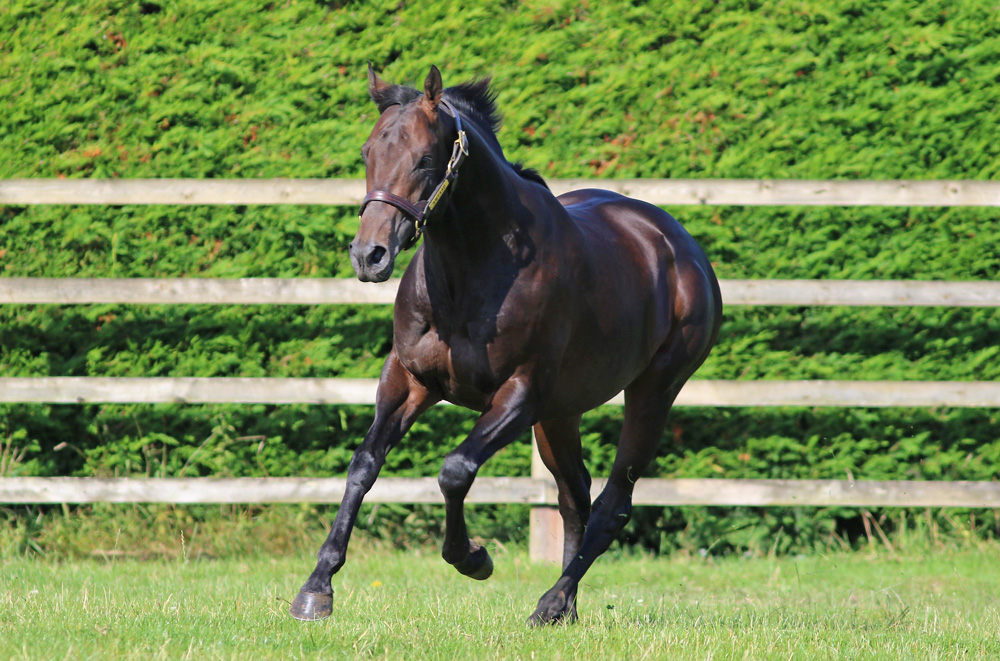 Sheikh Hamdan bought into Awtaad’s illustrious family in 1985 when acquiring Ghashtah, a half sister to US Triple Crown winner Seattle Slew and Guineas winner Lomond.

Asheerah visited Golden Horn to produce a colt called Al Zaraqaan who is now two, she has a yearling filly by Frankel and visited Dubawi last year. Her half-sister, Aaraas (Haafhd), is the dam of Madhmoon (Dawn Approach), who runs in Saturday’s Qipco 2,000 Guineas for Sheikh Hamdan. Bred at Derrinstown, he won twice at two and landed Leopardstown’s Group 2 Juvenile Stakes, but was beaten half a length into second when odds-on for a Listed race at the same track last month. Stanley says: “Kevin thought he needed a run – he’s a good doer and was carrying a bit of condition, so the Guineas remains the plan. The winner had the benefit of a run.”

Also entered in the Guineas is Sheikh Hamdan’s Daarik, a 325,000gns yearling purchase and one of Tamayuz’s most promising three-year-olds. Daarik and Tamayuz’s six-year-old son Mustashry are the sort of Stakes-calibre horses that will keep Derrinstown Stud in the public conscience – and what a year 2020 promises.

Racing and breeding’s appeal to men and women of financial substance is the never-ending challenge of buying or producing a top-class horse, and that is clearly part of the appeal for Sheikh Hamdan.

“It’s all about quality,” says Stanley, “and it’s hard to produce high-quality stallions. Sheikh Hamdan has never bought a stallion so we have to produce them, and since we are working alongside Shadwell our power is split.

“The pleasure for Sheikh Hamdan is his breeding operation – he loves to breed horses, to visit his studs, and see his breeding stock. He loves to retire horses. To breed one as good as Unfuwain, then retire him and breed Alhaarth, meant everything to him. 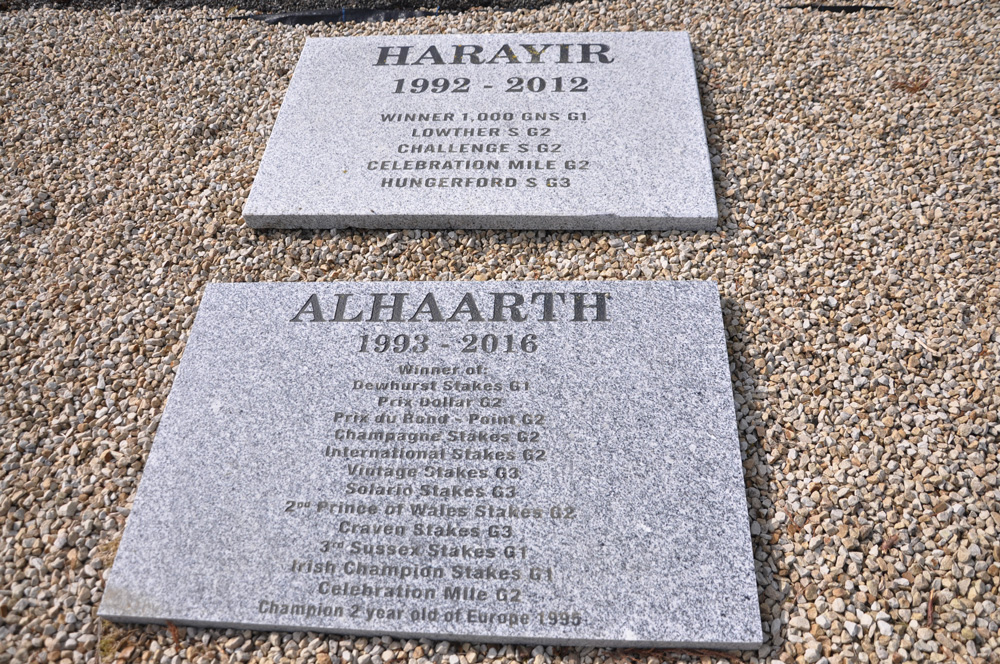 “The boss will buy into a proven racehorse, but not often – he bought into Arcano a few years ago before he won the Morny, and we then retired him as a stallion.”

Off the back of a good 2018 season Tamayuz’s popularity with broodmare owners has not diminished. “The quality of his mares has gone up,” says Stanley. “We limit him to 85 mares so we can be quite selective. We could have put his fee up, but opted not to, and he covers 85 mares well.

“We are not in the business of telling breeders which mares to send to our stallions, and while it’s natural to want high-quality mares our policy is to get a bit of a balance. We don’t cover huge books – about 120 mares is the most one of our stallions covers – which means mares can get slots to be covered, they tend to get in foal, and there is no flood of foals at the sales. It’s a happy medium between having enough foals on the ground to race and be competitive, and not having too many. Breeders look at statistics, and it’s hard to keep a high percentage of winners to runners when a stallion has 150 two-year-olds to run.” 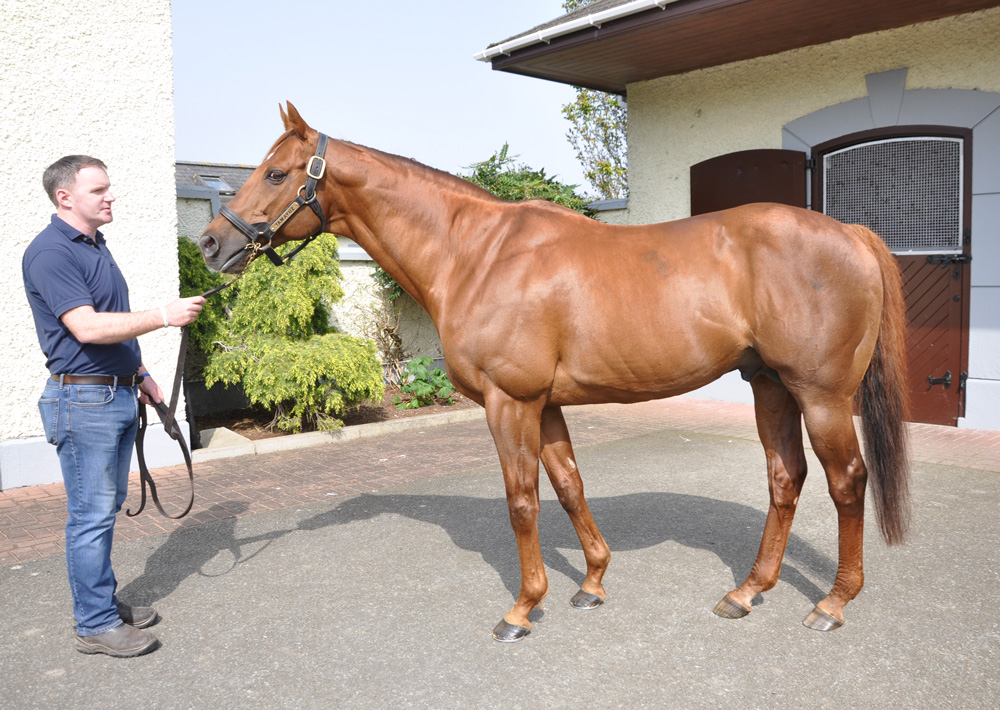 The quality of Tamayuz’s books has been going up, as the stud can be selective about his mares.

Derrinstown’s stallions have tended to be sprinters or milers, although Stanley says that is not by design. He says: “If one of the Sheikh’s horses won a St Leger we might have to ask if Derrinstown was the right stud for him, but if he won a Leger, and another big race, and was a headline horse, why not? Bahri and Lahib were milers, but could get stock who stayed further. I don’t think anyone sets out to breed a Derby winner – it is probably the result of a mistake. Do people set out to produce a horse for a set distance of 12 furlongs?”

Looking ahead, is there a Sheikh Hamdan horse that Stanley covets as a potential Derrinstown stallion? “Eqtidaar,” he says. “The market cannot get enough of Group 1 winners, and especially Royal Ascot winners. He was bred here, he’s good looking and a son of Invincible Spirit out of an Acclamation mare. I would love to get my hands on him.”

Stanley has worked at Derrinstown for 20 years, witnessing changes, but not to the stud’s ethos. He says: “The stud has grown in size, the stud book is bigger and yet it’s the same great place, with great people and a great boss. I believe he enjoys coming here to see his horses just as much as he does a day at the races. He loves his horses and knows generations of bloodlines and the individual characters.

“We have a huge client base that send us broodmares every year – some commercial, some owner-breeders, and while the Sheikh has a lovely band of mares, you do need outside breeders, an army to help you in years two, three and four.” 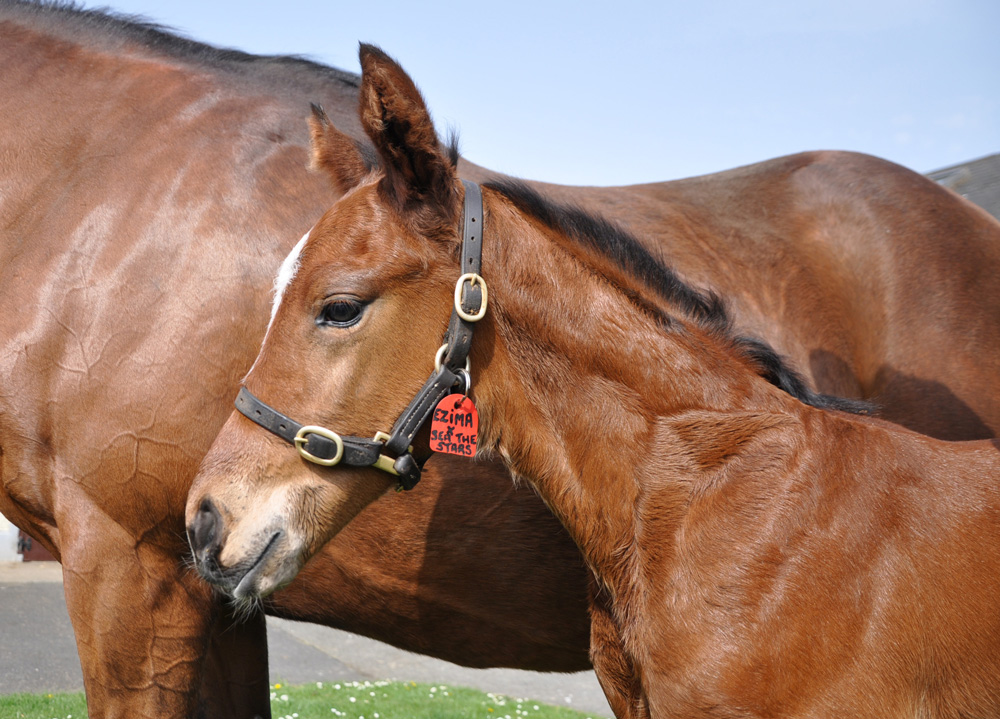 Another future Champion in the making? Sheikh Hamdan’s colt by Sea The Stars out of Ezima, who is a full brother to the Oaks and King George VI and Queen Elizabeth Stakes winner Taghrooda.