In Part 2 of Daragh Ó Conchúir’s interview with the Boardsmill Stud manager, he discusses the challenges currently facing the industry, including the emerging effects of Brexit and the further impact of Covid

The past year has thrown up the considerable challenge of Covid-19, though at the beginning of 2020, it was Brexit that was looming over the industry – not that nobody knew what might unfold. Now, the first of the unintended consequences are beginning to become apparent.

“With Brexit, you kind of carried on because there wasn’t much you could do until you knew the end position. That’s definitely going to hit home this year. Speaking to transporters and people who boarded our English mares, it’s having an impact. There’s definitely going to be a bedding-down period because there are still a lot of unknowns about how much hassle it will be and the costs involved. English clients are saying to me they’re gonna stay at home until they see what the full scenario is.

“You want the whole process to be as efficient as possible with any animal, but with travelling horses in particular. At the moment you don’t seem to have that comfort. Some of the transporters are saying there are seriously long waits for inspections – three-or four-hour delays – which is not really acceptable with horses. They’re gonna have to sort that out.

“The ITBA has been working on that with departments on both sides of the sea to try and find the most efficient way of doing it, within the given constraints. It’s a welfare issue too so that has to be prioritised. But until they actually had to deal with it, they couldn’t foresee a lot of the problems it would bring.

“With regards to the pandemic, we were lucky last year, as we were able to carry on pretty much as normal. I’d say the majority of people bred their mares. Very few stopped because of the situation we were in, and again, we’re lucky, despite it having some impact, that the sales got to be held eventually, which was a massive thing.

“Breeders and owners are the most important part of the industry and if breeders can’t sell their foals we can’t move on. It would have created a big backlog and knock-on effect if they had been interrupted.”

However, the hold-up of the point-to-point sector under Level 5 restrictions might still create that blockage in the system if the leading producers of racehorses with form are, at best, short of finances to reinvest at the scale they have been or, at worst, forced out of business.

“There’s nobody unaffected by that. Breeders with mares during the breeding season which are ready for covering have a choice to make. Last year, people carried on hoping sales would go ahead. This year, they might think twice.”

Like many of us, John does admit that he wonders when the ceiling will be reached in prices achieved by point-to-point maiden winners, and below that, stores and foals. The record for a point-to-pointer sold in public was shattered with the purchase of Douvan’s Ellmarie Holden-produced half-brother Jonbon (photo) for £570,000 by JP McManus at the Goffs UK November Sale at Yorton, in what seemed hardly a conducive climate. That figure was remarkably equalled at the Goffs UK December Sale when Tom Malone acquired the Donnchadh Doyle-handled Classic Getaway for an existing client in the Gordon Elliott yard. 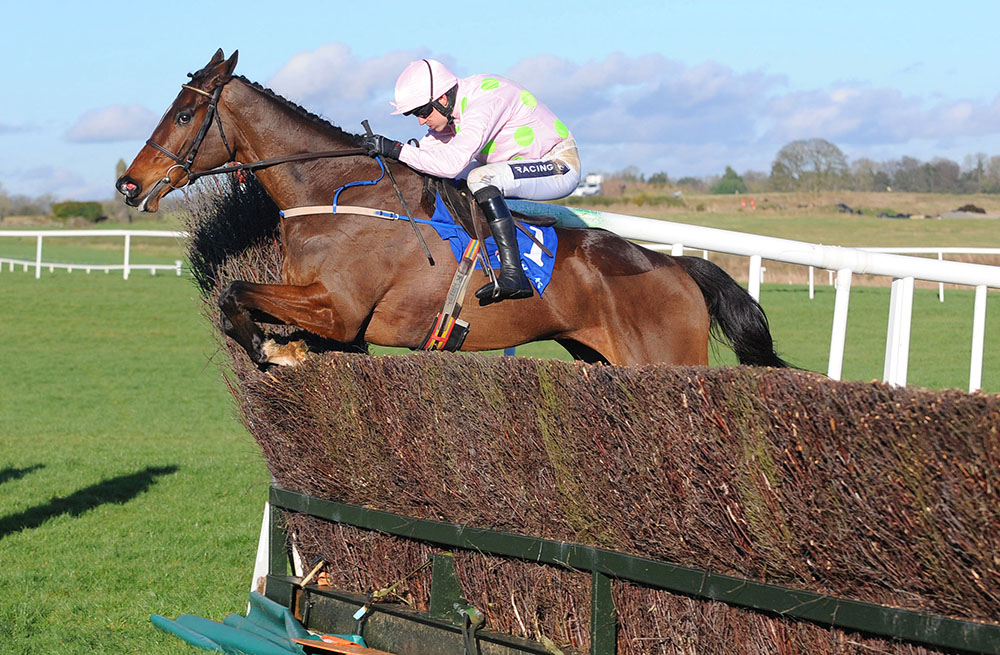 The eight-time Grade 1 winner, Douvan, whose half brother was sold to JP McManus for a record £570,000 at the Goffs UK November Sale at Yorton last year. That record was subsequently equalled at the following month’s Goffs UK December Sale.

“Each year you think it can’t go on or prices can’t keep rising. Ultimately, it’s market forces. There’s two people that want the best horse; they obviously have that disposable money to spend on it and it’s great for our industry that they want to spend it on a winning point-to-pointer. There’s a knock-on to everybody, for the whole industry – the stores for breeders and pinhookers. And then the pinhookers are in a stronger position to buy foals and that leaves the breeder getting more. It’s great that it’s so strong.

“I guess that sooner or later there will be some correction. Whether it’s outside forces or within, who knows, but while it’s happening it’s good for everyone.

“In a lot of respects, the point-to-point guys are filtering out the better horses. People will argue against that; that they’re being driven on too quick. That will always be an argument, that some horses will do better with a more patient approach, but these guys are producing for the day, for the bigger owner, whereas in the past, a lot of the trainers were buying the stores and doing it themselves over time. Now it’s the point-to-point guys that are doing it.”

While disappointed that pointing has been sidelined for now, Flood hailed the authorities for ensuring that racing has continued and welcomed the announcement that point-to-point trainers would be able to enter their horses at three extra National Hunt meetings to be staged at Punchestown, Wexford and Tipperary this month. He also hopes that the positive track record in terms of running fixtures under Rules since last June, and during the period in which point-to-point meets were held without negative incident in the autumn, will advance the argument for a full return.

None of this would have been possible without the continuing support of the owners, which has held up remarkably well, despite them not being able to attend meetings.

“You’d have to give them an awful lot of credit for sticking with it. If there had been no racing it’d have been a different story, but they still can’t get as much enjoyment by seeing their horses race under the current restrictions – or go to the yards – so to stick with it is great.”

Finally, Flood issues more praise on racing programmers for the transformative enhancement of the mares’ schedule. His father William was involved in the development of the bonus scheme that has proven so successful but the fact that there are so many races confined to mares, and that they can gain significant black type against their own gender right up to Grade 1 level, has provided countless markets for all stakeholders. 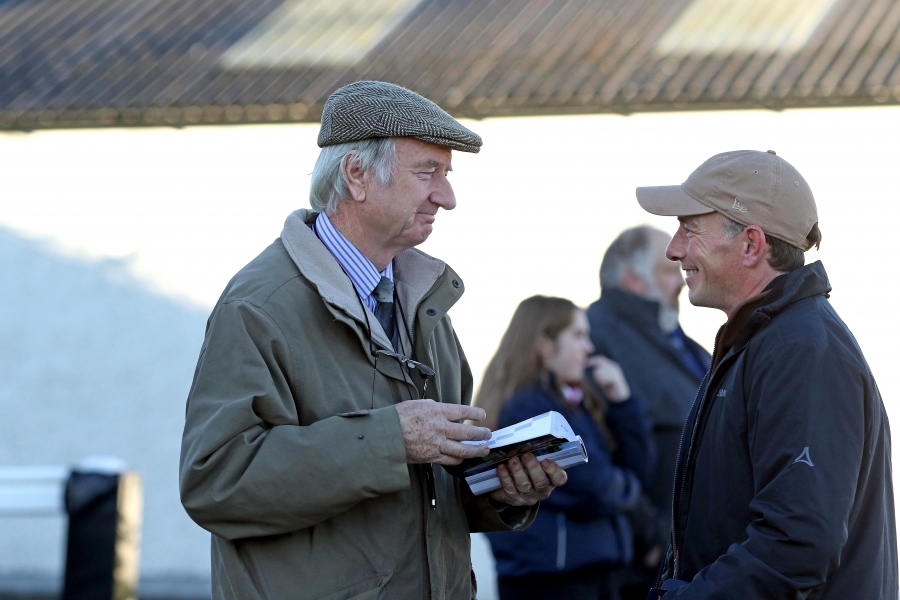 John Flood’s father William (left), who was involved in the development of the successful mares’ bonus scheme.

“We’re seeing the fruits of that now. I don’t get the anti-mare argument. Usually it comes from a punter’s perspective if they think it’s reducing the quality of racing or reducing the amount of better mares taking on the geldings, but I think it’s been too far the other way for too long. On the Flat, we’ve been so accustomed to fillies having their own Classics and it was never an argument that they should be taking on the colts more often, even though they do later on in their careers. Why shouldn’t National Hunt be the same? I’d be all for further strengthening of the mares’ programme, without completely diluting the sport.

“Ultimately there’s going to be a bedding-down period as you introduce races to attract more fillies. The numbers mightn’t be there initially but the aim is that the younger ones will be more attractive, will be brought through the system and more owners will be willing to buy them and ultimately then you’re gonna have ultra-competitive mares’ championship races because you have a bigger population of mares being tried. That’s better for the breed because it’s creating a new market.

“Some people say one of the reasons why the French are so successful is that they’re more critical of their mares, but that’s because they’ve always had a more equal mares’ programme. More mares were tried and they could then breed from the better ones. They don’t breed from those which have had soundness or wind issues, so it strengthens the stock.

“In England, some of the bigger trainers never considered buying a mare, now it’s a priority. Posh Trish, who was sold at Tatts Ireland in December, is a great example. Paul Nicholls trained her and a number of years ago he hardly had a single mare in training. Highclere owned her. She finished her racing career and went to the sales – she wasn’t even covered – and made €118,000. So it’s a massive selling point, the residual value of the good mares. You’d be very surprised if the guys in that particular Highclere syndicate aren’t demanding a filly for their next investment, having gotten that back. If it was a gelding at the end of his career, what was he worth?”

It is evident that John Flood is a chip off the old block in terms of a deep-seated interest and knowledge of the game far beyond his own front gate, as well as undoubted expertise in his direct line of work.

Much has changed in Boardsmill of late, but one suspects, when it comes to the roll of honour, nothing ever will. 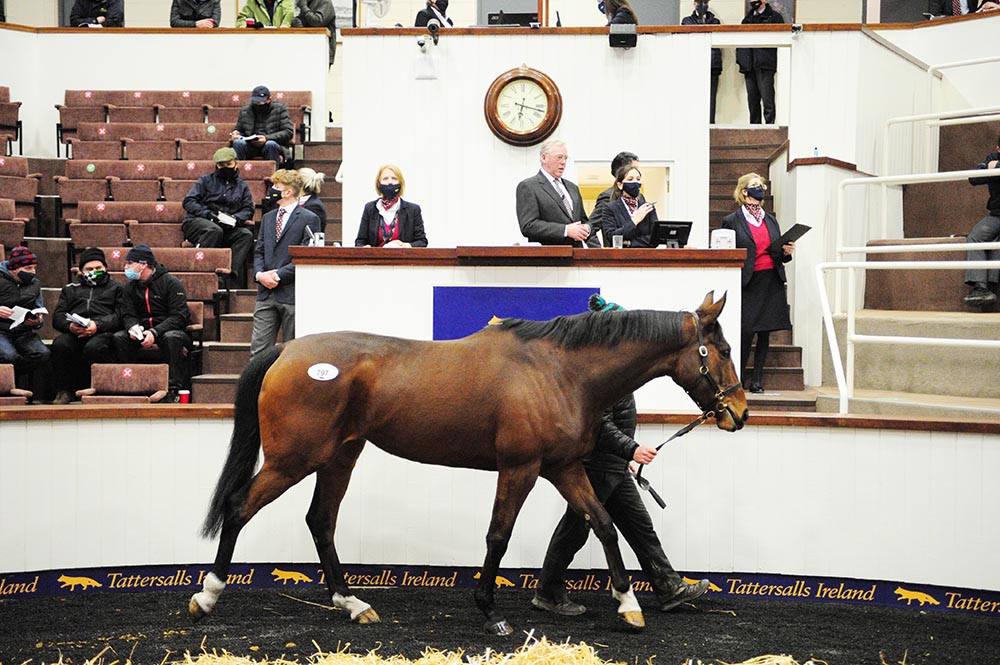 The Stowaway mare Posh Trish, who was sold to Oliver Loughlin for €118,000 at Tattersalls Ireland in December and is now in training in England with Paul Nicholls. 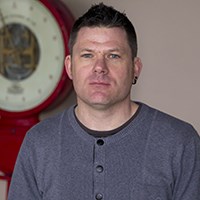