A lack of available candidates has forced smaller stallion studs to specialize in precocious speed. John Boyce looks at the principal two-year-old races to date to identify who might emerge as the next Mehmas.

The new-stallion market in Britain and Ireland is perhaps more polarized than in any other major breeding centre, with the possible exception of Japan. When some of the biggest breeding enterprises in the world, including the Maktoums, Coolmore and Juddmonte, base their operations on these islands, it is no wonder that few top-class stallion prospects become available to the smaller independent stallion studs.

The upshot is that many of the smaller farms have been encouraged to specialize in precocious speed, or, for those already involved in standing fast, precocious stallions, really ramp up their participation. And there is no question that demand for the progeny of such sires has lead to tremendous growth in the in the sector, with very positive knock-on effects for both the yearling and breeze-up markets.

Inevitably, it is a fast two-year-old that can attain Stakes-winning or Group-winning form as early as possible that usually piques the interest of most at this end of the business. And there have been some outstanding success stories in recent times that have served to build confidence among both breeders and buyers alike.

Last year Group 2 winner and 115-rated Mehmas set a record for the number of individual winners among his first two-year-olds, and this year we have his stud companion, the Group 3-winning 109-rated juvenile Cotai Glory, blazing a trail and posting the fastest-ever first 21 winners in history. Moreover, the Listed-winning 107-rated Ardad, who already has a Group 2 winner to his name, is the best among the British sires.

At the time of writing, we have had 11 Group-winning two-year-old colts in Europe and another nine that have won at Listed level. Go Bears Go, with a Timeform rating of 111p, is the highest-rated juvenile colt in Europe so far. Second in the Group 2 Norfolk Stakes at Royal Ascot after winning at the same venue on debut, Go Bears Go improved greatly to win the Group 2 Railway Stakes on his most recent start. He is typical of what this market is all about in that he was sold both as a yearling (for €59,000) and earlier this year at the Craven Breeze-Up for 150,000 guineas. By Kodiac’s accomplished miler Kodi Bear, who was smart and precocious enough to finish a very close fifth in the Group 2 Coventry before blossoming into a 123-rated winner of the Group 2 Celebration Mile later in his career, Go Bears Go is one of six winners from the winning Giant’s Causeway mare In Dubai, a half-sister to dual Group 1 heroine Nahrain, herself dam of the top-class Dubawi horse Benbatl. So, he cannot be faulted on pedigree. 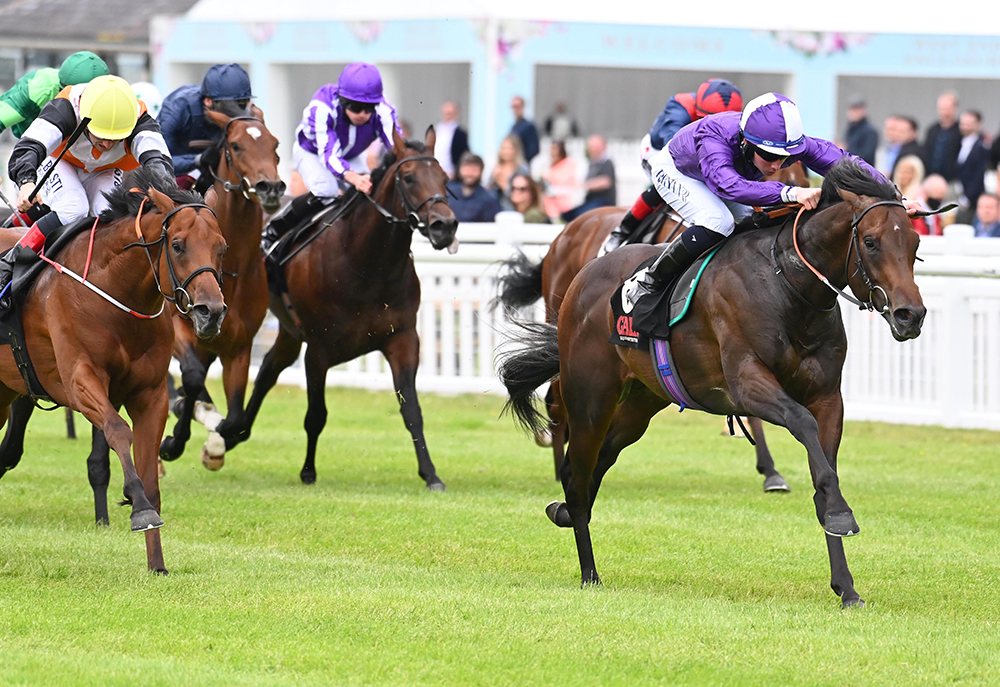 Go Bears Go wins the Group 2 Railway Stakes at the Curragh. At the time of writing, he is the highest rated juvenile colt in Europe.

The only colt to defeat Go Bears Go thus far is Perfect Power, whose Group 2 Norfolk Stakes victory came only a few months after he was bought for £110,000 at Doncaster. Like Go Bears Go, he’s a grandson of Kodiac, the archetypal source of high-class sprinting juveniles in Europe in recent times with more five- and six-furlong Stakes-winning two-year-olds than any other active sire. Perfect Power is a son of Ardad, a winner of the Windsor Castle Stakes at the Royal meeting before progressing to land the Group 2 Flying Childers. And, in common with many successful sires of precocious stock, Ardad didn’t require a huge Timeform rating (107) to prove capable of siring a Group 2-winning juvenile. He too was a breeze-up graduate, just like his son, selling for £170,000 at Donaster five years ago. Perfect Power hails from the famous Saganeca family of Arc hero Sagamix, Grand Prix de Saint-Cloud winner Sagacity, plus the high-class brothers Japan and Mogul. His dam was smart, rated 98 by Timeform, and won at up to 10 furlongs. So, he is entitled to go on to better things as the season progresses.

Another stallion prospect is the Group 2 Coventry Stakes winner Berkshire Shadow, the son of Dark Angel trained by Andrew Balding. A bargain yearling purchase at 40,000 guineas, Berkshire Shadow lacks little in pedigree. His grandam is four-time Group 1 winner Islington, herself one of three Group 1 winners out of Group 1 Yorkshire Oaks heroine and Group 1 St Leger runner-up Hellenic. Berkshire Shadow’s sire Dark Angel was another fitting the mold of a precocious sprinting juvenile with a lower-than-average Timeform rating, in his case 113. It’s probably fair to say that Dark Angel is still waiting for a credible sire son, but with Harry Angel waiting in the wings, that could change very soon.

In his very next race – the Group 2 Vintage Stakes at Goodwood – Berkshire Shadow found one too good for him in the shape of Angel Bleu, also sired by Dark Angel. He too has an excellent female line, his dam Cercle de la Vie being a Galileo full sister to no fewer than four Group winners, including the top-class multiple Group 1 winner Highland Reel, himself winner of the Vintage Stakes back in 2014, and Group 2 winner Idaho.

The three remaining two-year-old winners at Group 2 level this year are Godolphin’s Native Trail, winner of the seven-furlong Superlative Stakes, and Lusail and Asymmetric, who fought out the finish to the July Stakes, before the latter went on to land the Richmond Stakes at Goodwood. Both the Oasis Dream colt Native Trail and Asymmetric were yet two more two-year-old purchases, costing 210,000 and 150,000 guineas respectively at the Craven Breeze-Up. That makes it four Group 2-winning juveniles this year that are breeze-up graduates. Little wonder they are gaining in popularity! 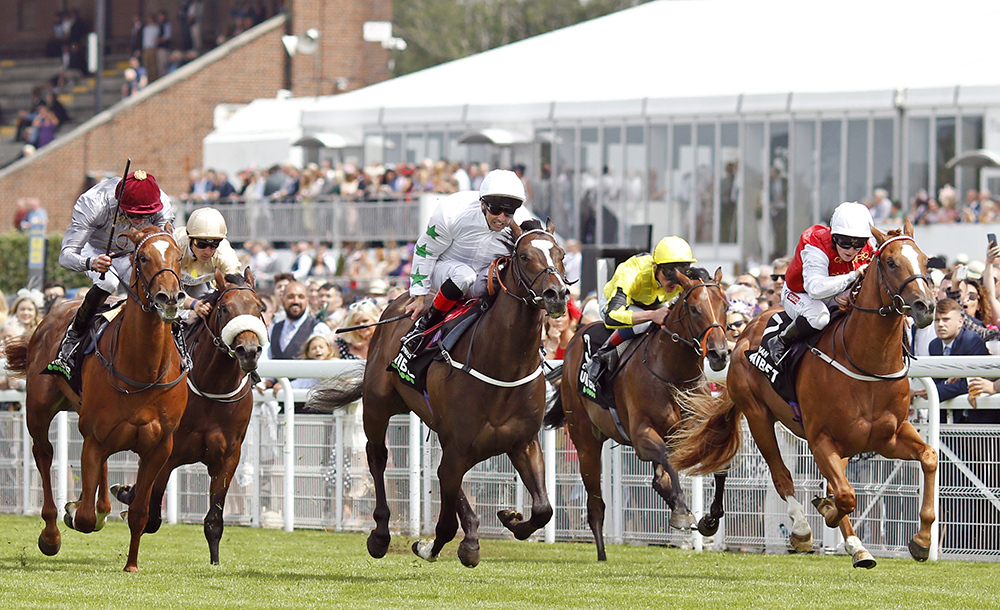 Native Trail, who has the potential to progress further up the ranks, is a big strong colt from an unraced Observatory full sister to Group 1 winner African Rose and Group 3 heroine Helleborine, dams respectively of Group 3 scorer Fair Eva and impressive Group 2 Coventry winner Calyx. It’s a top-class Juddmonte family that also features Group 1 Dewhurst winner Distant Music under the third dam, so plenty of high-class juvenile form on show.

Lusail, meanwhile, is definitely the type to interest breeders with fast commercial mares should he go to stud. Having Mehmas as his sire is a plus, even more so given that Mehmas has done the job again this year with his second crop, siring three Stakes winners so far. Moreover, Lusail is out of a two-year-old winning half-sister to Group 1 Golden Jubilee winner Fayr Jag.

Asymmetric also has a very commercial sire in Showcasing and he’s out of the five-and six-furlong winner Swirral Edge (by Hellvelyn), herself from a daughter of Shamardal that bred Group 3-placed Listed winner Fashion Queen. Third dam, the sprint winner Pizzicato, is dam of a pair of Group winners in Wunders Dream and Grecian Dancer.

There are plenty of other potential candidates for stud masters to look at. Several more have Group 3- or Listed-winning form and there are still more with high levels of form that has not yet been translated into black-type success. By the end of the year, several more will no doubt be short listed as potential sires of fast-maturing two-year-olds – the very type the market seems to be craving at the moment.