Festival domination does not extend to sires

Jumps racing is a changing, dynamic landscape, the Cheltenham Festival now firmly the culmination. Important races in the calendar seem ever decreasingly so; more like a mere stepping stone to the Festival. Then there is the dominance issue, which has been brewing for quite some time. Cheltenham is the dominant meeting, which Ireland dominated by virtue of Willie Mullins and Gordon Elliott, who dominate the training ranks. They happen to house most of the horses of the dominant owners. Over half the races at the Festival went to Elliott and Mullins, and they accounted for all bar two of Ireland’s total wins. All bar two of Elliott’s wins were Gigginstown House Stud-owned, who finished on seven winners — twenty-five percent of the total races run.

Who remains on Michael O’Leary’s training roster is a Darwinian process — their current list of trainers representative of elite jumps racing’s current state: concentrated and narrowing. Calls to rein-in the increasingly concentrated levels of success have been fundamentally misguided, approached in similar ways to that of curbing wealth inequality. Market power “taxes” such as limiting the number of runners an owner/trainer can have in any one race are unrealistic, not least because you are then almost certainly “taxing” racing’s biggest donors — those who financially spend and lose the most on racing. 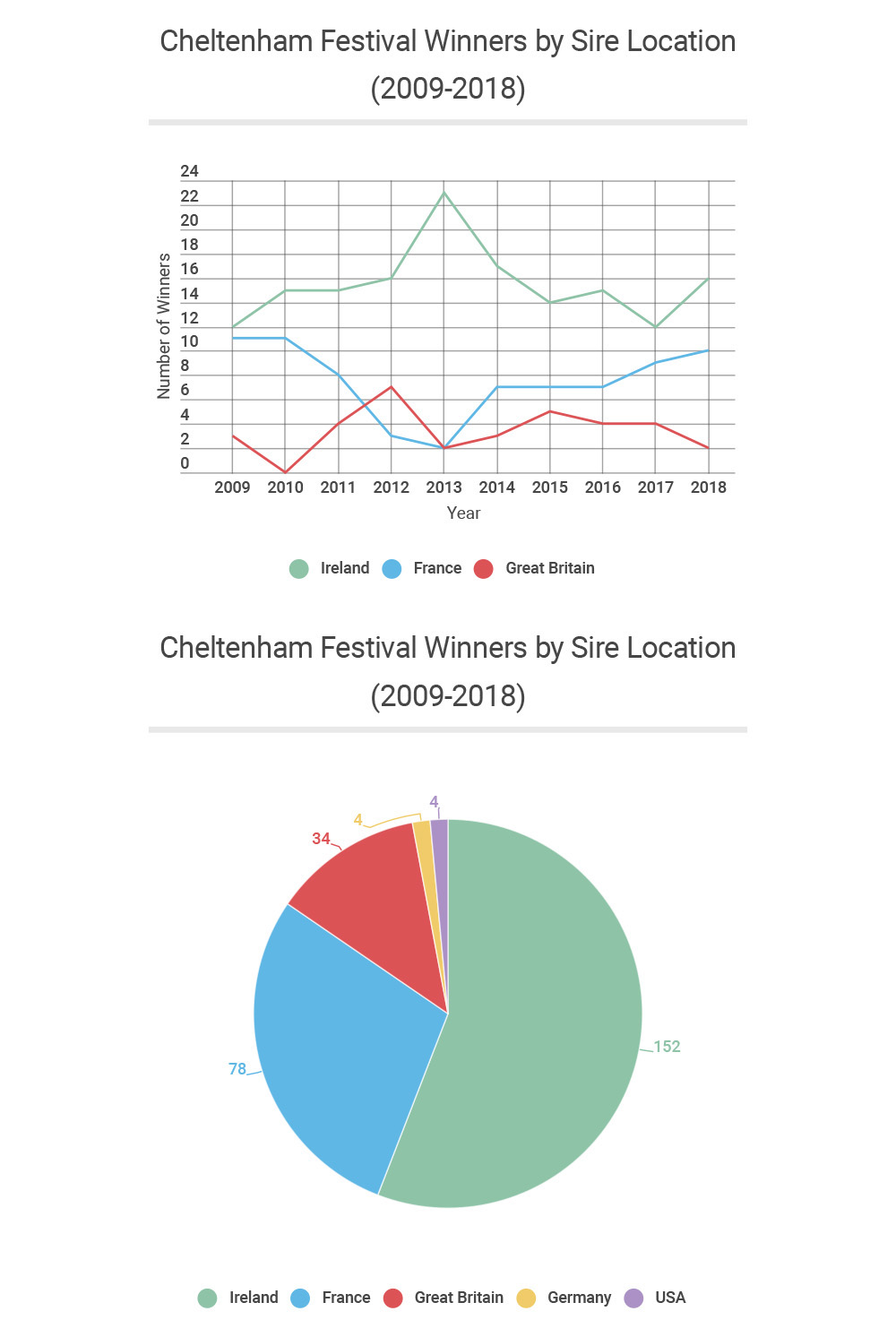 No such domination exists in the sire division of the Festival. Twenty-eight different sires won the twenty-eight races, and many of those winners were inexpensively produced. Supreme Novices’ Hurdle winner Summerville Boy was bred off just a €1,500 fee. By a Hardwicke Stakes-winning son of Grand Lodge, Sandmason stands at Lacken Stud at Bunclody in County Wexford and deserves to see his book of mares to grow exponentially on last year’s figure of one mare, and none in 2016.

Sixteen races went the way of Irish-based sires, ten to the French and two to the British (based on country of residence at the time of covering). The 2018 results were broadly representative of the ten-year trend. Of the 271 races run at the Festival from 2009-2018, 56% have gone to Irish-based sires, with the French accounting for 29% and Britain 13%. The cultural differences between Ireland and France are evident within these figures. Sixty-eight different sires were among Ireland’s 152 winners, compared with 46 sires making up France’s 78 winners. In other words, Ireland have a 32% higher concentration of winners per stallion than France, which reaffirms the French breeding ethos of supporting a wider range of sires.

The 2018 results are underwhelming for the UK, given that their two winning sires — Mount Nelson and Sir Percy — were both flat sires at the time of covering. The former now enters his second season as a dual purpose sire at Boardsmill Stud, County Meath, having covered a star-studded book of 222 mares in 2017 that included Airlie Beach, the dam of Simonsig, and Native Mo, dam of Gold Cup winner Native River. Thankfully, the seeds have been sown for the British to up their game. Incentives such as MOPS and the TBA Elite Mares Scheme will help to raise the number of mares residing in the UK, which will in turn better the performance of the British-based sires. That said, they are unlikely to reach anywhere near the sheer mass of the Irish mare numbers, so one won’t be envisaging a Prestbury Cup for sires anytime soon.

Jukebox Jury, who recently relocated from Gestüt Etzean to Burgage Stud in Ireland, was responsible for the Grade 1 Triumph Hurdle winner Farclas (nearside).

Farclas’s win in the Triumph Hurdle was a timely winner for his sire, Jukebox Jury, who relocated this year from Gestüt Etzean in Germany to Burgage Stud in County Carlow. The seven-time Group-winning, dual Group 1-winning son of Montjeu put up his best performances in the Preis von Europa and when dead-heating in the Irish St Leger as a five-year-old, earning a peak Timeform rating of 123. His pedigree also appeals from a National Hunt viewpoint, given that he is on the same cross as Hurricane Fly: Montjeu out of a Kenmare mare. 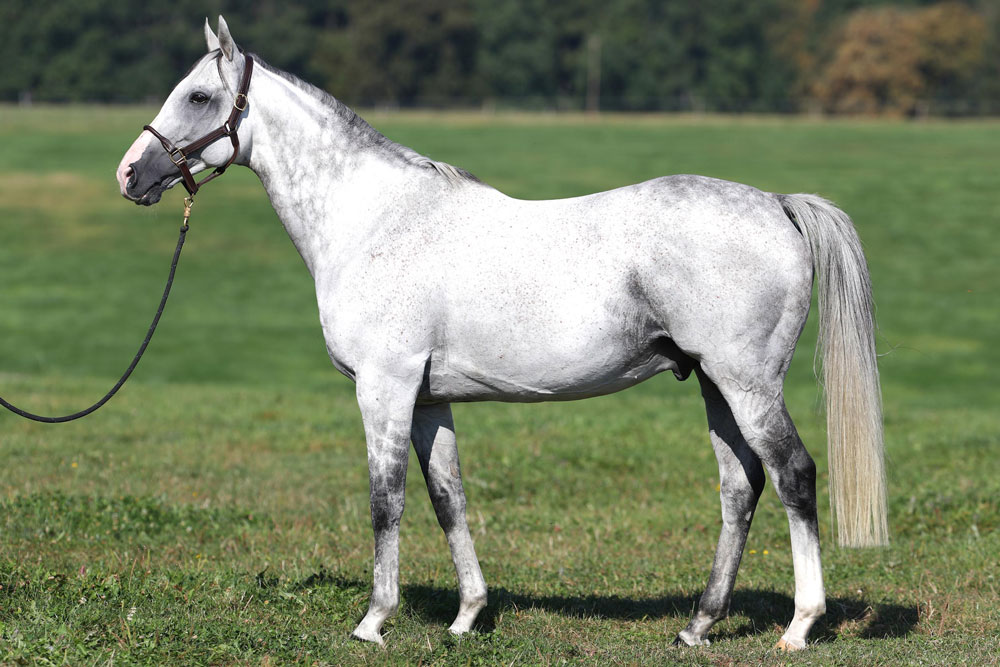 King’s Theatre and Robin Des Champs topped the ten-year table with 14 winners each, the latter much helped by Quevega’s six wins in the Mares’ Hurdle. Oscar and Presenting tied for joint-third on 11 winners each, followed by Kayf Tara, by far the most successful of the British-based sires on seven. The Overbury Stud resident was named top sire at the Festival in 2016 — arguably his year of reckoning when Thistlecrack, Ballyandy and Blaklion all won Grade 1 races.

Polarisation has increasingly become a key feature among industry and society since the turn of the millennia. But it does not exist in National Hunt sire success. It is diffuse, and given that it heavily relies on small, recreational breeders, a high variance of sire success is bound to lighten their hopes and maintain their enthusiasm.