Admire commercial stallion stations for their market-share skills, but long live the multi-tasking, old-school stallion masters who trade because horses are their way of life. Happy in the latter category is the Dawson family of County Durham’s Nunstainton Stud, located within lorry-spotting distance of the A1, some four miles west of Sedgefield.

Two jump stallions now reside at Nunstainton, namely Listed winner Dragon Dancer (Sadler’s Wells), who finished second in the 2006 Derby and stands for £1,500, and the unrelated Norse Dancer (Halling), a dual Group 3 winner with multiple placings in Group 1 races and standing for £2,000 – both sires’s fees are subject to concessions for winning mares. Norse Dancer took up residence earlier this week after moving from the Futter family’s Yorton Farm Stud in Powys.

Nunstainton gained its first stallion in 2003 after Chris Dawson Snr decided an in-house sire could serve his band of mares without them needing to leave the premises. As ever, such a simple plan soon gained a commercial edge, one that has been pushed along by Dawson’s son, also named Chris, although his three siblings also play a part in one way or another. To give a picture of the size of their operation, the younger Chris says: “We covered 40 mares last season, which for a little stud like ours was great. We foaled 37 mares, a mix of our own and those belonging to local people, and we have plenty of young stock in addition to four or five pointers, which is fewer than in the past, but that was where we started.”

Pinhooks that have proven successful include the €3,500 purchase of a Craigsteel gelding who won a point and was sold for £45,000, later gaining a rating of 150 while under Philip Hobbs’ care, and a Grand Plaisir gelding picked up for £3,600 and sold for 10,000gns after a pointing victory. Named West End Rocker, he won a Becher Chase for Alan King.

Of the current roster, Chris says: “It’s coincidence that we now have two Dancers at the stud, but on breeding they give us a strong hand.

“Dragon Dancer is a son of Sadler’s Wells, while Norse Dancer is more or less free of Northern Dancer (he appears in the fifth generation as sire of Nijinsky, grandsire of Dance Machine, the dam of Norse Dancer’s sire Halling). That makes him an outcross for Sadler’s Wells mares, of which we have six or seven of our own. We like covering our own mares, which is how we got into stallions.”

Norse Dancer, who has sired a Grade 1 winner in Yanworth, has become an unexpected recruit. Dawson says: “Last season we stood Millenary (Rainbow Quest), but at 23 we decided it was time for him to retire, and he’s now living with some family friends in the New Forest, where he will cover a few half-bred mares. 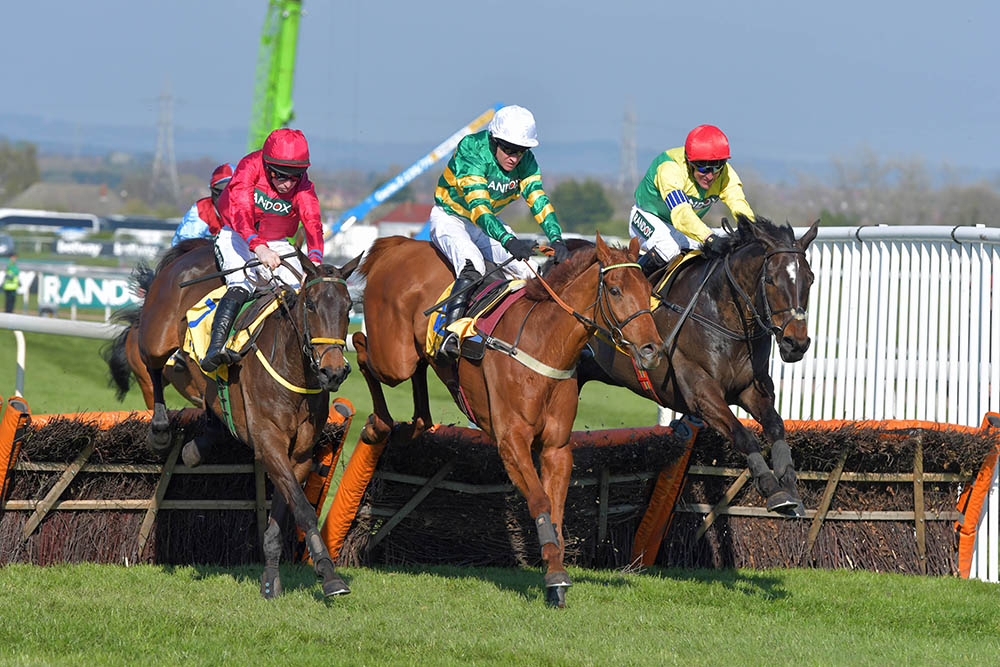 Dual Grade 1 hurdle winner Yanworth (centre) on his way to victory in the Stayers Liverpool Hurdle at Aintree. He is now the winner of 13 races in all, including a Grade 2 over fences.

“We replaced him in midsummer with Full Of Gold (Gold Away), who had been standing in France (Haras du Grand Chesnaie), but after six weeks he went down with colic and we couldn’t save him. Richard Venn, who had found Full Of Gold for us, said it was getting a bit late in the year to find another sire, and then Dad came up with the idea of ringing Dave Futter at Yorton to see if he had any ideas.

“Dave said come down and take a look at Norse Dancer, who although 21 is very fertile and produces a nice foal. He covered a handful of mares last year, but as an option for mare owners in this part of the country, we expect him to be popular.

“A lot of our clients are owner/breeders, often from a point-to-point background, who want to use a nice stallion to produce a capable horse. If it wins point-to-points and is good enough to go under Rules they are happy. They are not affluent and don’t want to spend a lot of money on fees. Quite often their mares live out around the farm – it’s the old-fashioned way of doing things, but it produces good results.”

Horses in their blood

A who’s who of the Dawson family unveils multiple strands of equestrian interest. Chris Snr and his wife Rachel were sheep farmers who kept point-to-pointers and half a dozen broodmares. Chris Jnr was a talented amateur rider who partnered 133 winners in points and under Rules and is engaged to equine vet Wendy, who is on maternity leave looking after Georgina, aged two, and Rose who was born four months ago.

Chris’s brother Phil is the farmer around the place, but since he met and became engaged to Gemma Darley, a physio at Jack Berry House and a daughter of former Champion Jockey Kevin Darley, his sporting habits have drifted back towards horses. Capped by England as a schoolboy rugby player he went on to become part of the Newcastle Falcons team, but is now encouraging a bit more Flat breeding at Nunstainton, an interest engendered by his future father-in-law’s involvement with Qatar Racing.

Chris says: “As the number of horses around the place grew we started getting a bit of conflict with Phil, who didn’t want the fields chewed up by galloping horses. So last year we put in a circular carpet gallop and that solved the problem. There’s always a solution to problems.” 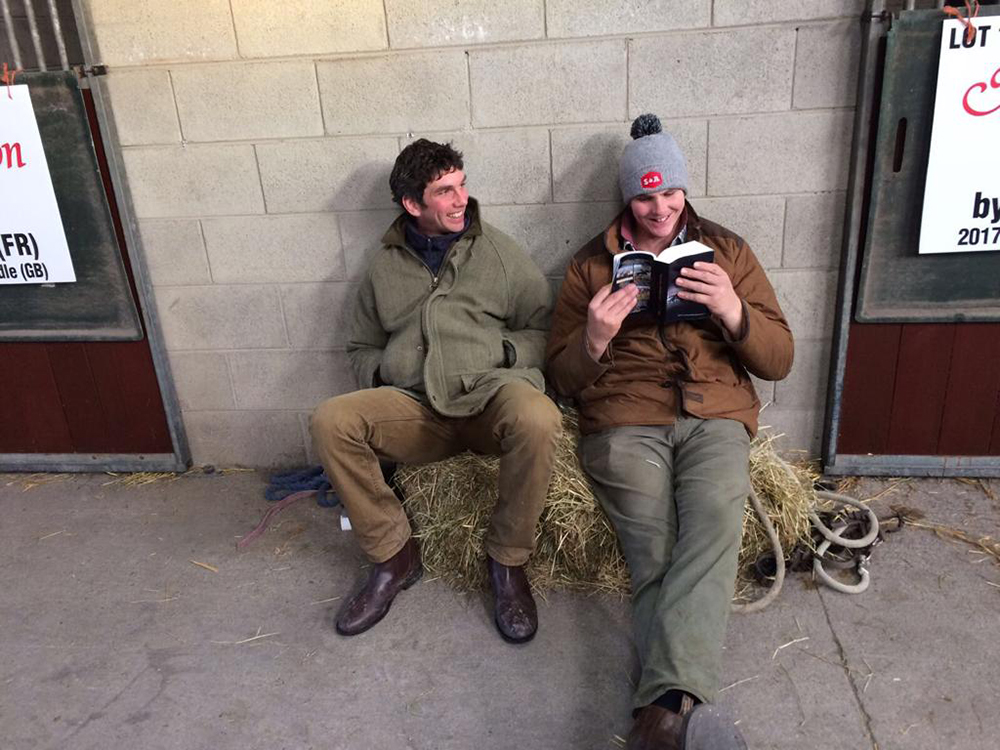 Chris Jnr and his brother Phil relax between viewings at Tattersalls

Another brother, John, is a Champion Amateur Rider with more than 150 winners and counting – he and his wife Alice run a breaking and pre-training yard in North Yorkshire – while the Dawson siblings are completed by Anna, who works as racing secretary to trainer Rebecca Menzies.

Of the family’s move into thoroughbred stallions, Chris says: “Mum and Dad used to send the family’s mares to local stallions like Primitive Rising and Say Primula and would occasionally send one further afield. One year they sent a wagon load to Ireland, but only one came back in foal. After adding up the transport costs Dad said, ‘Let’s find our own stallion’, which led to us standing Dapper, an unraced son of Hernando from Kirsten Rausing’s top family. He was a half-brother to Alborada and Albanova who were both Group 1 winners.

“Dragon Dancer is from the same family, his dam, Alakananda (Hernando), being a half-sister to Dapper. On a separate note, Kirsten has said it is her dream to breed a Derby winner, and the closest she has managed is second with Dragon Dancer, who was runner-up to Sir Percy. Of course, she’s delighted to stand Sir Percy at Lanwades Stud, but he was the horse who foiled her dream.”

From Dapper to Dancer

Chris says: “It was Dapper who got us going, initially by covering our own mares and then those owned by local people. His biggest book was only 12 mares, but he sired winners.

“Next we leased Great Palm from Arctic Tack Stud, and then, from the same stud, we leased Trans Island. In July last year at Doncaster we sold a Trans Island, home-bred three-year-old store for £20,000 to Ian Ferguson, who is such a noted judge of a youngster. He was a big horse and to be honest we were surprised when just three and a half months later he appeared in a bumper at Aintree from Nigel Twiston-Davies’ yard. Named I Like To Move It, he won easily and followed up under a penalty at Wincanton.”

Sadly I Like To Move It was the final foal produced by the mare Nobratinetta, who was owned by Chris’s brother John and his wife Alice, although they do own a filly out of the mare. Other recent homebred winners to cheer include Chinwag (Trans Island), who won twice for Neil Mulholland’s yard over the Christmas period.

Nunstainton could find itself catching a wave in the next year or two. Norse Dancer covered some nice mares off the back of Yanworth’s rise to the top and those foals are now coming through, while Dragon Dancer stood in France for six seasons before moving to Nunstainton in 2018. Chris says: “He’s got a useful horse here called Goodbye Dancer (rating high over hurdles of 139); Sean Doyle has a smart pointer in Ireland called Er Dancer, who won a maiden hunters’ chase at Fairyhouse before Christmas, while in France one of his daughters, Marble Eyes, won at Cagnes-Sur-Mer last week. There’s also a smart hurdler called Dylidancer who has been placed in Graded hurdles. If Dylidancer was sold into a British yard and could keep progressing that would help our lad’s profile. 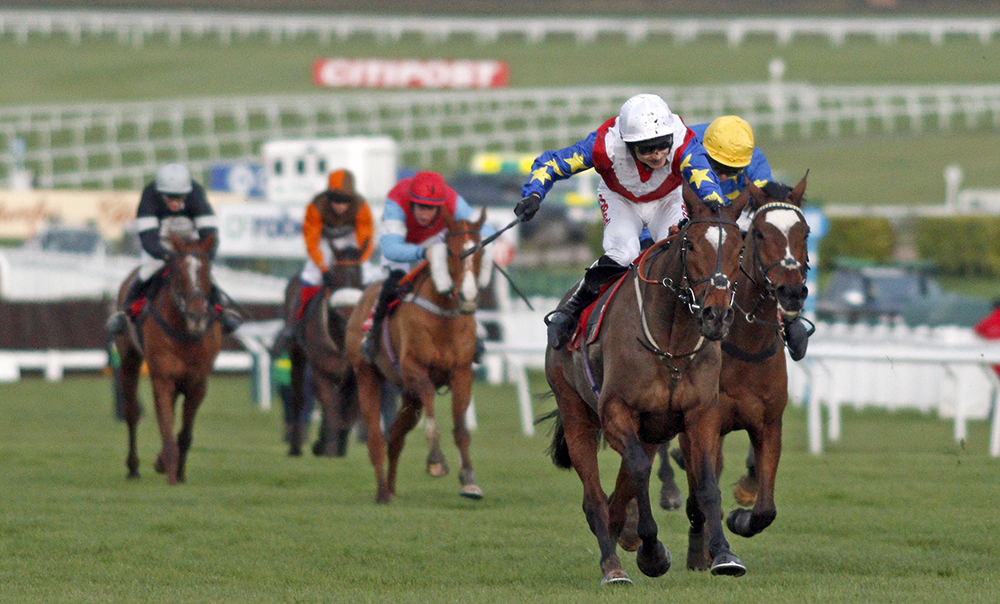 The winner of six hurdle races, Goodbye Dancer (by Dragon Dancer) records his biggest success to date in the Citipost Handicap Hurdle at Cheltenham.

“Running a small stud like this is a passion, but the stallions have to be part of the business. We foal mares, we breed, buy and sell young horses and we keep some point-to-pointers, but everything is for sale. We’re trying to upgrade the broodmare band, but it takes time.

“We’re a family-run business and only employ a couple of staff, but Lauren Belt has been a loyal employee for seven years. Mum looks after the foaling side; Dad does a bit of everything, including driving the lorry, and we all muck in.”

So hats off to the Dawsons and others of their kind; small in relative terms, but doing their bit for the racing and breeding industries.