When Sea The Moon retired, most observers expected him to specialise in siring middle-distance performers. After all, his Group 1 win came in the Deutsches Derby over twelve furlongs. That said, it was his first try at the distance, having built up to the race with a win at two and two Group wins at three over shorter. His eleven length romp was as visually as impressive a performance in any Group 1 you’ll see, for he raced in the straight without company and won eased down. He earned a Timeform rating of 127, crowning him Champion Three-Year-Old Colt in Europe.

However, at this early stage of his stud career, he is proving more adept than his own sire Sea The Stars at producing juveniles winners, as Lanwades Stud owner Kirsten Rausing explains. “He had a tremendous year last year, siring sixteen individual winners, two Group winners and four blacktype performers.” 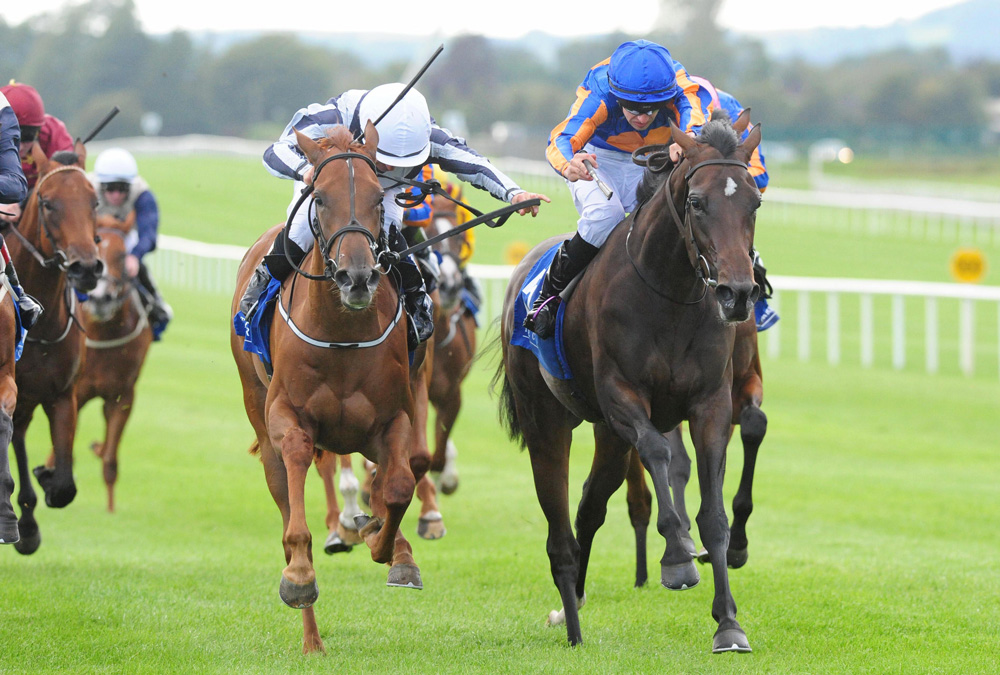 His first crop has yielded fifteen Stakes performers from only eighty-two runners, an outstanding strike rate of eighteen per cent Stakes performers to runners. This year has been just as good for Sea The Moon. Alpine Star, Alpha Centauri’s half-sister, cemented herself as one of Ireland’s leading juvenile fillies with her win in the Group 2 Debutante Stakes. She has every chance of making her presence felt in next year’s Classics, and another Irish-trained filly, Hamariyna, gained a win in the Group 3 1,000 Guineas Trial.

In Germany, last year’s domestic Champion Two-Year-Old Quest The Moon improved to place in Group 1 company, and this year, Sea The Moon managed to produce another German Champion Two-Year-Old in the shape of Wonderful Moon, whose recent twelve length win in a Group 3 at Krefeld was in stark similarity to his sire’s Deutsches Derby win – an explosive move in the straight before coming home alone. That performance earned him a Timeform rating of 112 and he’s the country’s leading contender to win their equivalent of the Derby in 2020. Both German Champion juveniles were bred by Sea The Moon’s owner/breeder Gestüt Görlsdorf. In total, twenty per cent of his runners to date have earned a Racing Post Rating of at least 90. This is as good as it gets in this regard, and one must note that his book of mares would not have been in the same league of his more expensive counterparts.

Out of the Monsun mare Sanwa, a sister to the German Derby winners and sires Schiaparelli and Samum, in addition to German Oaks winner Salve Regina, Sea The Moon is steeped in the very best bloodlines Germany has to offer. One might assume that his record with two-year-olds thus stems from covering multiple mares with speed. But this is not so, as Miss Rausing points out: “He has done incredibly well, siring two-year-olds from mares who were middle-distance performers themselves. In fact, I cannot recall one single sprint mare covered in his first book. There is a case to be made that a really good stallion should get two-year-old winners who train on anyway. For example, Niniski raced just once at two but sired a Champion two-year-old in Kala Dancer from a first crop of just twenty-six foals. Some of the races he won would be the kiss of death for any stallion going to stud on the Flat now.”

Niniski was a huge success at success, siring ten Group 1 winners and thirty-seven Group winners from books of mares which never exceeded fifty-one in any given season. He initially stood for £5,000 before rising to £40,000. Despite being a dual Classic winner with successes in the Irish St Leger and the Prix Royal-Oak, he was capable of siring horses faster than him, such as the aforementioned Kala Dancer, winner of the Dewhurst Stakes. Another of his sons, Hernando, a stalwart on the Lanwades roster for seventeen years, won the Prix du Jockey Club, and Petoski was heroic in the King George VI and Queen Elizabeth Stakes at three, beating a field which included Oh So Sharp and Rainbow Quest.

Sea The Moon’s impressive stud record has been mirrored in the sales ring. His yearlings have sold for up to 525,000 guineas, with purchasers including Godolphin (who also bought his most expensive yearling this year for €170,000). Nearly a fifth of his lots offered as yearlings this year realised at least €100,000, and he covered a full book of 164 mares in 2019. “In general, they are nicely balanced, medium-sized – not too big, not too small. One overwhelming feedback from trainers is that they have very good, co-operative temperaments, and are helpful in every way.

“We had a long waiting list in 2019 and he is fully booked for 2020. We at Lanwades like to offer something to breeders that would make commercial sense. We have had plenty of support for him from Germany and the tripartite countries, in addition to some of the world’s leading breeders, including His Highness the Aga Khan, who sent us three mares in 2019 and will be sending the same number next year. His support is a great feather in our horse’s cap given that he already stands Sea The Moon’s sire and one of Sea The Stars’ sons in Harzand.”

Remaining at a fee of £15,000 in 2020, Sea The Moon must represent fantastic value. The future is exciting for both him and new addition Study Of Man, who offers some top-class form and bloodlines.

The Prix du Jockey Club winner of last year maintained his top-class form through this year, finishing runner-up in two Group 1’s, not least behind subsequent Prix de l’Arc de Triomphe winner Waldgeist. His pedigree is a unique selling point, being a son of the tremendous Deep Impact and a grandson of the mighty Miesque. As one can imagine, Miss Rausing had to fend off strong competition for such a desirable stallion prospect. “It’s been a very long term plan of mine and I was delighted and grateful as I had a lot of competition from Europe, Kentucky and even Japan. Interestingly, the first, third and fourth leading first-crop sires in Japan this year are sons of Deep Impact, which looks very promising. He will be well supported by leading European breeders such as his owner, the Niarchos family, Coolmore and Juddmonte among many others.” 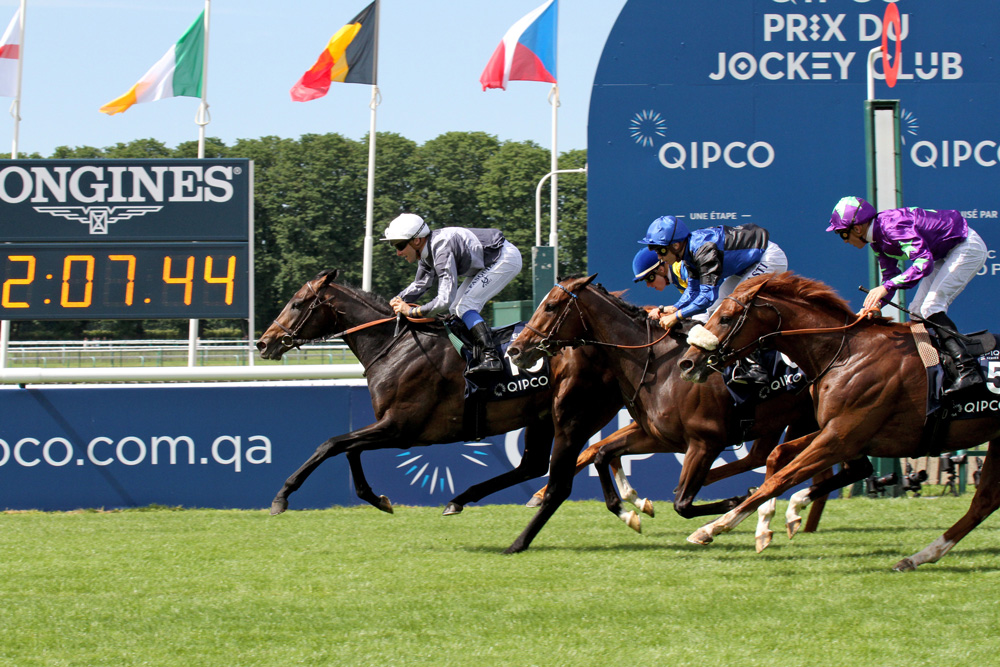 Study Of Man records his biggest success in the Group 1 Prix du Jockey Club at Chantilly, defeating fellow Group 1 winners Intellogent, Flag Of Honour and Olmedo in the process.

The ultra-versatile Bobby’s Kitten will have his first two-year-olds reach the track this year, now the only son of Kitten’s Joy, the sire of Roaring Lion, now standing in Great Britain. “Bobby’s Kitten is the only three-year-old to win the Breeders’ Cup Turf Sprint, beating No Nay Never which is an even more exciting feat now,” says Miss Rausing. “He was the specialist miler who could sprint, and he represents a good outcross to breeders.”

Bobby’s Kitten showed aptitude at a high level over a range of ground and trips. He did most of his racing over a mile yet won a sprint at the Breeders’ Cup. He even won a sprint on holding ground by a huge margin when in training with Dermot Weld. He has seventy-six yearlings to race for him next year, with buyers of his progeny including Shadwell Stud.

The Lanwades roster for 2020 is completed by Sir Percy, who has stood the test of time and is due to commence his thirteenth season at the stud. Often forgotten is that although he won the Epsom Derby (beating Dragon Dancer, who was co-bred by Miss Rausing along with Abbey Bloodstock), Sir Percy was an unbeaten Champion Two-Year-Old winner of the Dewhurst Stakes. He appears to have passed this precocity onto his progeny. “He has sired seventy-nine individual two-year-old winners, and his progeny are loved by trainers. Very few Dewhurst winners have gone on to win the Derby.” Sir Percy still posts robust figures in the sales, with his yearlings realising nearly 100,000 guineas this year.

There is much to look forward to for Lanwades Stud and their roster – each of whom offers their own unique selling points to breeders. “We have the last representative of the Mill Reef sireline; the only son of Deep Impact and Kitten’s Joy in Great Britain, and the first son of Sea The Stars in Europe.” Using the independent option might just be the magic formula for breeders next season.