A Dash of the Exotic

At around the €10,000 fee marker, breeders had an ample choice of first season sires in 2017. Mehmas was a most precocious juvenile; he had won twice in May as a two-year-old as well as finishing runner-up in the Listed National Stakes. He built upon this by chasing home Caravaggio in the Group 2 Coventry Stakes, then gaining his first Group win at Newmarket’s July meeting in the Group 2 July Stakes. He even managed to edge out Blue Point at Glorious Goodwood, when successful in the Group 2 Richmond Stakes, before signing off his career with placings in both the Group 1 National Stakes at the Curragh and the Group 1 Middle Park Stakes. A hardy, neat juvenile, he withstood eight starts, six in Stakes company within a relatively short space of time at such an early age and achieved an official rating of 115. 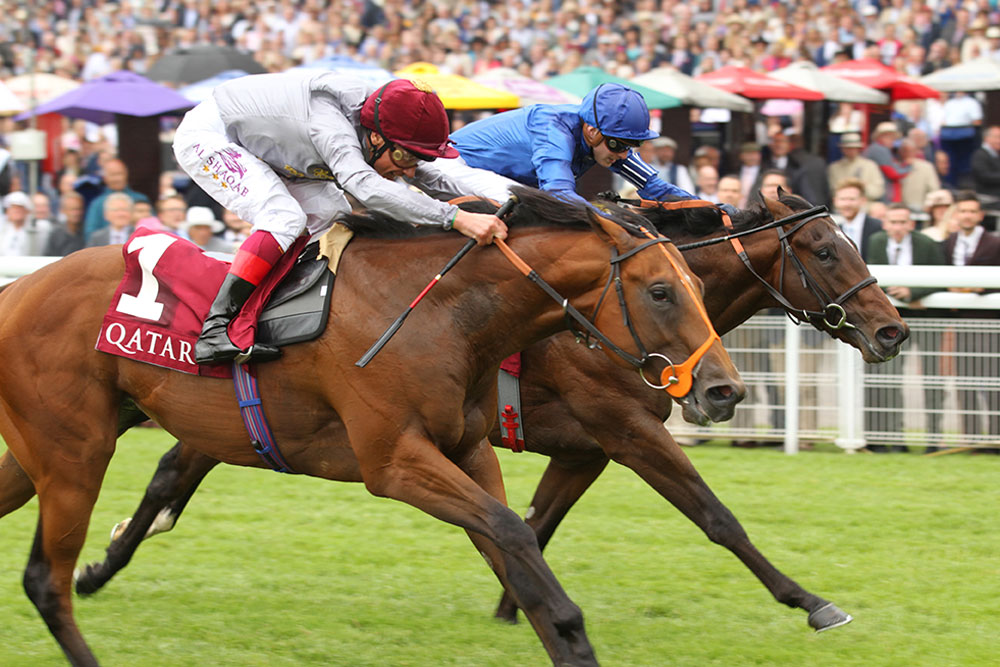 Mehmas edges out Blue Point to win the Group 2 Richmond Stakes at Goodwood.

Tally-Ho Stud, who stand Mehmas, are typically good at giving a sire every chance of success at stud. Their sires often receive substantial books and the stud also support their progeny in the sales ring. Mehmas has 145 yearlings to race for him next season. This combined with his precocity leaves him with every chance of becoming a leading first season sire by winners.

He’s a son of successful speed sire Acclamation, who has produced the likes of Dark Angel and Expert Eye in an illustrious career which has yielded twenty-two Group winners. Mehmas’s first foals made up to €85,000 from a €12,500 fee.

Keeping on the topic of speed, Lanwades have an interesting recruit to their stallion roster in Bobby’s Kitten, a son of Kitten’s Joy (also sire of Roaring Lion and Hawkbill) who has become a huge success on turf in the US. He was the first son of Kitten’s Joy to stand in Europe.

Bobby’s Kitten did most of his racing over a mile, winning a Grade 3 at two over 8.5 furlongs, before placing in the Breeders’ Cup Juvenile Turf behind Outstrip. Kept on the go at three over a mile, his career best performance came when dropped back in trip to 6.5f furlongs for the Breeders’ Cup Turf Sprint, beating none other than No Nay Never, who has become one of the most in demand sires in Europe. Switched to Dermot Weld as a five-year-old, he only managed to race once for him, winning a six-furlong Listed race by a huge margin. His first crop foals made up €30,000 last year.

The influx of international sirelines was also seen with Pride Of Dubai, who is by leading US sire Street Cry (who, like his son, also shuttled to Australia), Pride Of Dubai was a dual Group 1-winning juvenile, winning the Blue Diamond Stakes and Sires’ Produce Stakes over six and seven furlongs. What made Pride Of Dubai such an interesting stallion prospect in the Northern Hemisphere was his fusion of Australian speed and precocity with his commercially appealing and familiar dam side. His dam is a half-sister to the Classic-winning mare Rafha, best known as the dam of Invincible Spirit and Kodiac. The family has also been the source of the likes of Gustav Klimt, James Garfield and Pinatubo, the latter of whom looks the most exciting two-year-old we’ve seen so far this year.

Pride Of Dubai’s first foals realised up to 82,000 guineas, bred off a fee of €15,000, and he has three fillies catalogued for the first part of the Arqana sale.

Another two-year-old out of the top drawer with his first crop this year is Belardo. In fact, he was crowned Champion European Two-Year-Old for his Group 1 Dewhurst Stakes win, in which he authoritatively beat Kodi Bear, with fellow stallion Estidhkaar further behind. That performance earned him a rating of 119. Best with a slight ease in the ground, he maintained this level of ability to chase home the brilliant miler Solow in the Group 1 Queen Elizabeth II Stakes, before earning another Group 1 win at four in the Lockinge Stakes. In what was to be his final start, Belardo ran the exceptional US mare Tepin to half a length in the Group 1 Queen Anne Stakes, beating a high-class field which included Lightning Spear, Toormore and Ervedya. 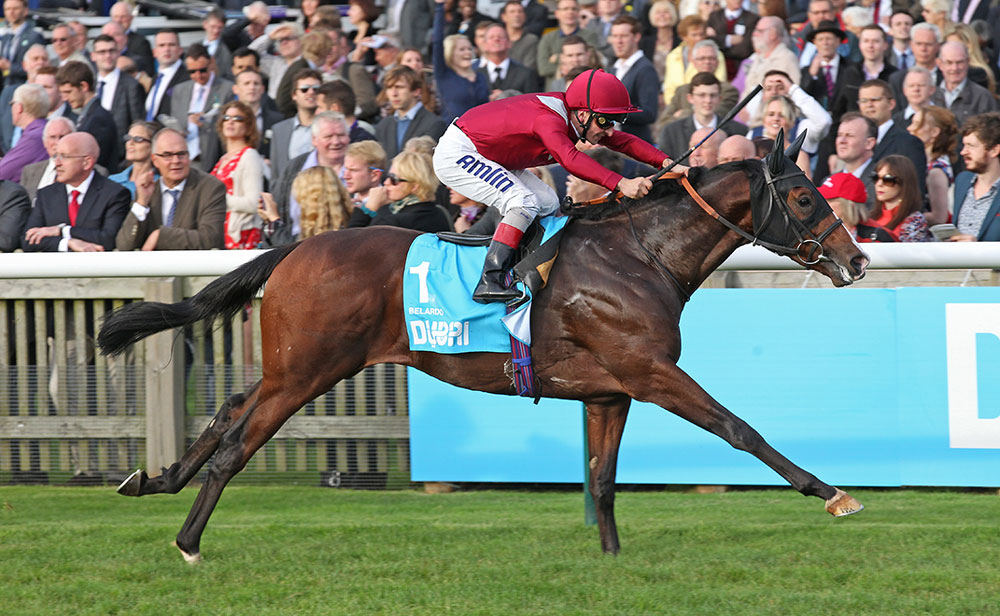 Belardo secures his status as Champion Two-Year-Old by winning the Group 1 Dewhurst Stakes from Kodi Bear.

Belardo is currently the only son of Lope De Vega standing at stud. Since he retired to Kildangan, his sire has continued to prosper, siring the Irish 2,000 Guineas winner Phoenix Of Spain, in addition to last year’s breathtaking Breeders’ Cup Juvenile Fillies Turf winner Newspaperofrecord.

Belardo’s female side of the family is equally desirable, with his dam Danaskaya, like her son, being crowned a Champion juvenile (in Ireland), for placing in the Group 1 Cheveley Park Stakes and Group 2 Lowther. He also hails from the same family as the useful sprinters Kistena, a Group 1 Prix de l’Abbaye winner, and speed stallion Mujadil. Belardo’s first crop foals averaged 29,000gns and made up to €77,000 off a first season fee of €15,000.

Finally, it is a sign of how the shape of the breed is changing towards that of speed, when a Derby winner is standing for €10,000 having not yet had a runner. That is the case for dual Derby winner Harzand, who initially stood for €15,000 upon retiring to Gilltown Stud.

His wins in the both the Epsom and Irish Derby enabled him to be named Champion Three-Year-Old Colt in Europe, and he even had to overcome adversity prior to his Epsom win when he pulled off a shoe in transit, requiring an ice bucket to ease the pain. He then beat Idaho in the Irish Derby. Such was his reputation by now that he was sent off a strong favourite for one of the best renewals of the Group 1 Irish Champion Stakes ever; a field which included Almanzor, Found, Minding, and Highland Reel. Unfortunately, he failed to reproduce his best form and it was disappointing that we never got to see the real Harzand against older horses, but he nevertheless retired with a rating of 123. He may not have been a precocious two-year-old, but he was simply the best three-year-old around. For that alone he must be worthy of respect, not to mention the fact that he is a son of Sea The Stars, one of the greatest ever. His first foals realised up to €60,000 last year.