There is a lot that is different and a few things that have not changed. The Guineas taking place in June and the Derby and Oaks in July is very different in horseracing terms, but the old head-scratcher of trying to figure out which horses will make a successful leap from a mile to a mile and a half is very much still with us.

There are several ways of approaching the puzzle, of which pedigree analysis remains highly important. But striding and sectionals are two others which have proved their worth in recent years. Masar was a big price for the Derby in 2018 on the back of a third place in the 2000 Guineas, but his stride – long and relatively slow – pointed to his being a middle-distance horse more than a miler, and his sectionals when running away with the 8f Craven Stakes pointed to his being a good price at that.

In that same Derby, Roaring Lion had shown so much speed and such a fast stride in winning the Dante at York that there deserved to be serious doubts about his being as effective at 12f as 8f/10f. In the event, Masar strode to victory at Epsom and Roaring Lion emptied late on in finishing third. 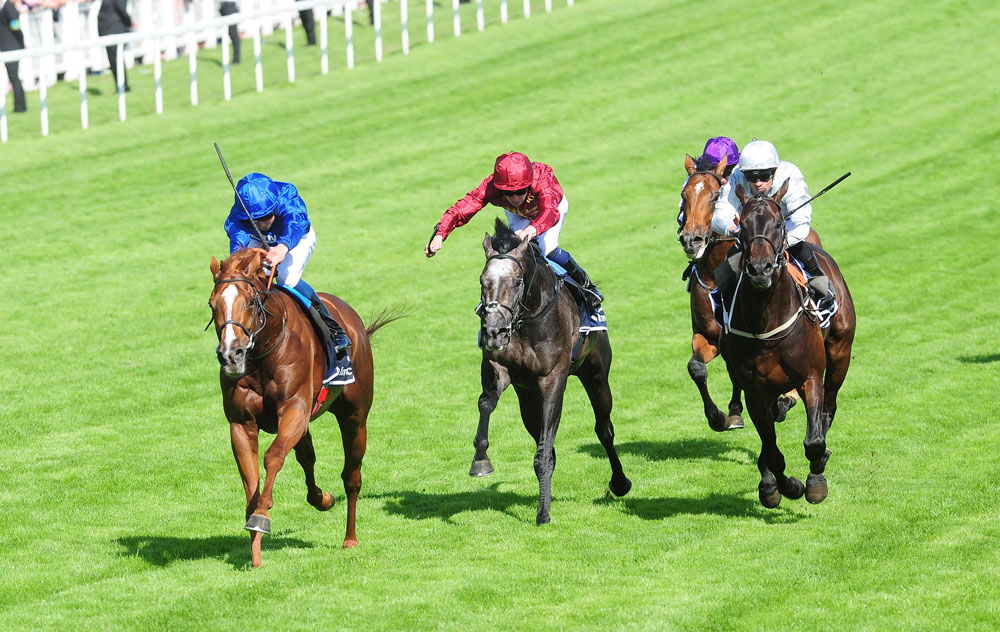 A long and relatively slow stride helped Masar to outlast the quicker striding grey Roaring Lion in the 2018 Derby, in which the latter faded to finish third.

Twelve months ago, Too Darn Hot strode and quickened like a miler and went from quite a short-priced favourite for Epsom to a non-runner there and a champion 7f/8f performer in a short space of time. There have been some examples that have not worked out quite so well, of course!

In basic terms, the faster a horse strides, the shorter the distance it is likely to prove most effective at, though (as with many things in breeding also) this is a matter of probabilities rather than certainties. At the other end of the distance spectrum, some stayers manage to stride quite quickly, but nearly all of them also switch off and stride slower for significant portions of a race.

What do striding and sectionals tell us about the main contenders for this year’s Derby and Oaks? Firstly, they cast a fair amount of doubt on whether the 2000 Guineas winner Kameko (by Kitten’s Joy) will prove as effective at 12f as he has done so far at 8f. He has consistently strode like a miler who may get 10f, hitting a peak of 2.48 strides/second and a minimum of 2.27 strides/second at two years, and a slightly more restrained 2.37/2.27 at Newmarket. The Guineas was very strongly run, as sectionals showed, and Kameko won it through stamina, but he did go too freely in a steadily run race at the same course and distance when second in the Royal Lodge as a juvenile.

History tells us that only about 10% of horses which contest the 2000 Guineas go on to be described as staying 12f or further by Timeform in the fullness of time. That means perhaps one or two can be expected from this year’s 15-runner race. Fourth-placed Military March (2.38 max/2.16 min) seemed quite a bit more likely to fill that role than Kameko, but has been withdrawn due to a setback.

The Lingfield Derby Trial winner English King (by Camelot) has hardened to favouritism in recent weeks, and there is no question about his stamina credentials, while his form has been boosted. A maximum/minimum cadence of 2.40/2.09 at Lingfield (recorded electronically by Total Performance Data) shows that English King can quicken but also stay, and his late splits were fast enough to suggest he was value for a few lengths more over Berkshire Rocco at a trip (11.6f) only just short of the Derby. Berkshire Rocco has since been beaten the same margin, and marginally less easily, at Royal Ascot by the subsequent Irish Derby winner Santiago. 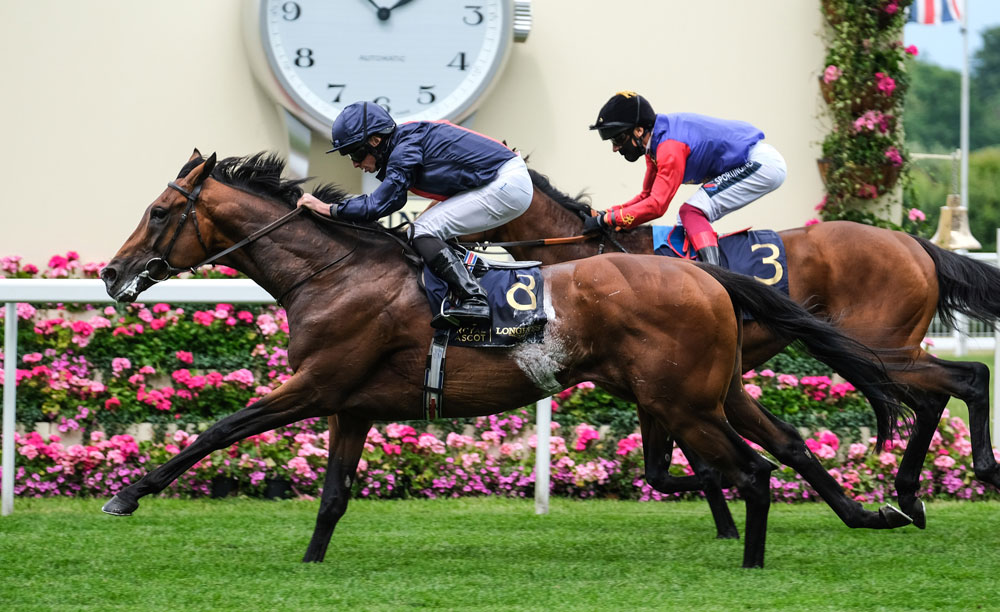 Russian Emperor was never stronger than at the finish when winning the Hampton Court Stakes at Royal Ascot.

It is more the way he races, and the late sectionals he records, which point towards Russian Emperor (by Galileo) seeing out the Derby trip and possibly even being suited by it. He took a bit too long to get going when a half-length second to Cormorant in the Derrinstown Stud Derby Trial at Leopardstown and was never stronger than at the finish when beating First Receiver in the Hampton Court Stakes at Royal Ascot, both at 10f. Times and splits tell us that the latter was a well-run race and probably quite a high-quality one, too. Russian Emperor’s striding came in at 2.42/2.27, which is quite high, but 12f should be within his scope.

On balance, the Irish 2000 Guineas runner-up Vatican City (by Galileo) seems likely to stay an extra half mile, given his 2.38 max/2.19 min at the Curragh, even if two or three others are ahead of him in the pecking order.

I backed Military March (at 28/1) for The Derby last year, but in his absence am now left with Russian Emperor alone. English King seems the rightful favourite, but Kameko looks vulnerable. We shall see!

The Oaks is dominated by the 1000 Guineas winner Love (by Galileo), and you will not find much ammunition for opposing her in striding. She registered a maximum/minimum cadence of 2.34/2.20 at Newmarket and should, at the least, be as good at 10f/12f as 8f. However, it does have to be said that the fillies she beat may not have amounted to much on the day: Cloak of Spirits, Quadrilateral and Final Song – second, third and fourth respectively at Newmarket – were all beaten further at Royal Ascot a couple of weeks later.

The Ribblesdale Stakes at Royal Ascot promises to have a bearing on the Oaks, as it was won by the second-favourite for Epsom in Frankly Darling (by Frankel) from Ennistymon (by Galileo). It looked pretty convincing, as Frankly Darling was able to be eased near the line, but both striding and sectionals speak highly of the runner-up also. 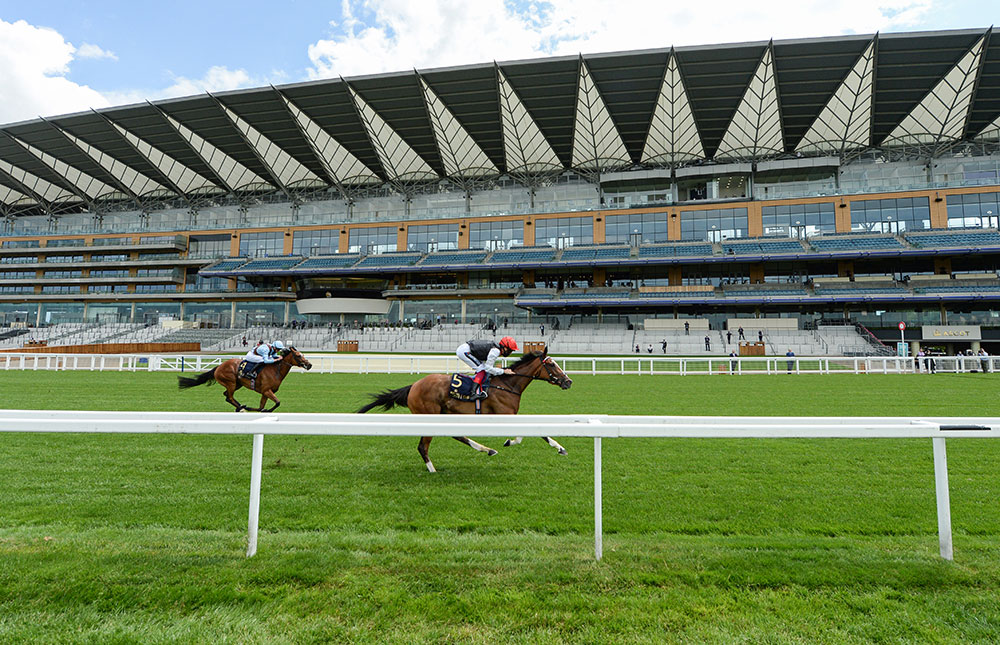 Frankly Darling defeated Ennistymon convincingly in front of near empty stands at Royal Ascot, but the latter could surprise if the Oaks were to turn into a stronger test of stamina.

The Ribblesdale was unevenly run, and Frankly Darling was better placed than Ennnistymon turning in, settling the matter with a turn of foot before the second stayed on well. Ennistymon strides like a stayer (2.31/2.09, compared with Frankly Darling’s 2.39/2.21) and showed a longer stride (25.1ft max, compared with the winner’s 24.5ft), which she got to use only late in the day. If the Oaks ends up as a test of stamina, then Ennistymon could surprise a few at long odds.

Other Irish-trained fillies prominent in the betting for the Oaks include the one-two from the Irish 1000 Guineas, Peaceful (by Galileo) and Fancy Blue (by Deep Impact), both of whom could be fancied to stay on breeding, but less so judged on striding. Peaceful turned over at between 2.45 and 2.34 strides/second at the Curragh, while Fancy Blue, who did well on sectionals to close late on, was as high as 2.53 and no lower than 2.34. A typical Derby/Oaks winner might figure on something like 2.30 to 2.35 strides/second maximum and 2.20 to 2.25 strides/second minimum. It remains to be seen whether the Epsom Classics prove to be typical in this respect in this most untypical of years!